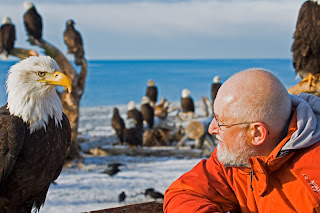 In 2008 I had the honor of being welcomed to the home of Jean Keene, The Eagle Lady of Homer, Alaska. I spent about a week there with my friends Ken Conger, David Tuttle and Jerry Pellett. The daily routine consisted of of being at Jean's backyard from 7 AM to about 11 AM to photograph the feeding of bald eagles by Jean helped by her friends and visiting photographers. There is no other place where you can get "eye-to-eye" with and closely photograph these magnificent birds. Jean passed on in January of this year and the feeding of the eagles will probably cease March 25, 2009. She had been feeding the eagles for December to March for more than 30 years. Her feeding of the eagles was going to cease anyway do to pressures from local government and wildlife officials. She took also took care of injured, and while we were there, she just grabbed one with an infected eye and sent it to the rehabilitation center in Anchorage.. It seems that she knew all the eagles and they were not afraid of her. While there, we had the pleasure of taking Jean on her birthday to dinner at her favorite place, the Lands End Restaurant, where she was a regular customer. To our delight, she consumed her favorite drink and a steak while we listened about her eagle stories. 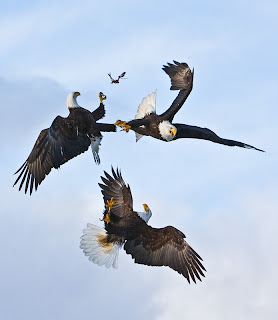 Jean's backyard was the meeting place of "Who's Who" in the world of wildlife photographers. It is likely that most of the incredible photos of bald eagles you see published were taken on her backyard. jean go me my "15 Minutes of Fame" when I received recognition from the National Geographic Society International Nature Photography competition for 2008 for an image of bald eagles in aerial combat over a fish taken from her backyard. This image is to the right. I considered returning to Homer this year, but it would not be the same with Jean.
Posted by Jose's World at 10:45 AM

These are stunning Jose!! Of all the raptors, the bald and golden eagle have to be my favorites.

Good times had by all in AK. I tried to comment to your MN post and for some reason would not let me. Blue Skies.

An interesting story and stunning photographs. I also caught the same theme about the feeding in your most recent post and it bothers me that with all of the problems facing wildlife today that officials have to try to stop something such as this.

What a truly special and amazing post... not only is the photography outstanding, but your story of Jean brought tears to my eyes.

WOW.. that is an interesting post and what an amazing image. You all were so fortunate to experience these amazing birds up close. Aloha, Renee :)

That's a great story and an amazing photograph. Ken had talked to me about possibly going on that trip, but I was not able at the time. It's a shame that Jean is gone, and you're right that Homer will never be the same.