My second day with a blog and trying to decide what kind of blog should I have? I do not know, but my major interests are photography and travel. Let me tell 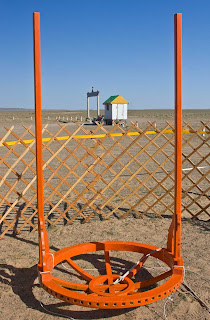 you a bit about my trip to Mongolia during October/November of this year. I flew to UlanBator the capital of Mongolia from home to NYC, then to Seoul, Korea where I met other friends (which I have never met before) and finally into my final destination. Spent the night in the capital and the next day after a short tour of the city flew to the Gobi desert in a small plane. After arriving there I was taken to a small camp where I was assigned a ger. A ger is a circular tent with a main central pole (s) that with a wheel that holds the wooden ribs that support the roof and connect the circular wall about 4 feet high. It had two beds a chair and a metal box used for cooking and heating with a chimney that goes through the roof. It was comfortable but with a very small entrance door and I had to bend down quite low; in the 4 days I spent there, I never missed busting my head while entering or leaving. The bathroom facilities were at a central location as well as the restaurant. It was cold at night even with the fire going. The photo to the right show the ger wheel which is the main support and the other is a ger photographed at other location in Mongolia where I went to visit the Eagles Hunters contest that will discuss at another time. 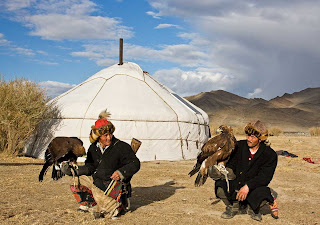 Marco Polo passed this way in his travels to China. The dunes are gigantic of very pale yellow/pink color. In all honesty, the color is hard to determine since it changed with the sunlight and the cloud cover. There was a small waterway nearby where the local herders would come to Our main purpose in going to the Gobi desert was to visit the beautiful sand dunes that run form miles; it was part of the Silk Road and probablywater the camels, horses, sheep, goats. We were extremely lucky to photograph caravans moving along the dunes; this aloowed for unique images and I have never gotten such clear and vivid colors before. This I attribute to the quality of the early sunrise/sunset lighting conditions, to the crisp cold air and dustless air. The best is to show you some of the images. 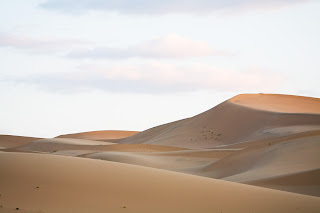 tripod an a couple of cameras in the early freezing temperatures was demanding. Struggling wit

h keeping the hands cold and from slipping or sinking in the sand and setting the tripod was physically demanding. We were out in the field before sunrise without breakfast; not fun but rewarding. We were extremely lucky that it was not windy at all in the mornings but at night the wind blows hard and erases the sand tracks of animals, motorcycles and humans from the previous day activities. Yes, there are motorcycle that are replacing the horses and camels.

One morning I was shooting with the sun at my back 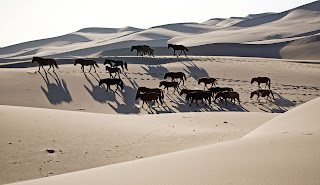 and for whatever reason I turned back and look in top of a tall dune. To my amazement I saw a herd of horses at the top and with the lead stallion pacing around looking for the best way to descent. All of the sudden he took off the the rest followed. What a sight!!! It just happened, I was at the right place and the right time looking in the right direction. I went wild shooting at various camera settings since I was shooting back lighted subject and got a few good ones. 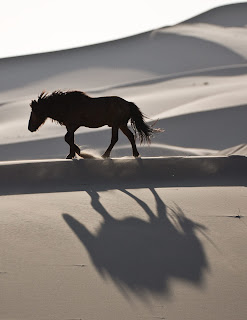 our return flight. When we got to the airport we were told that our seats has been taken by the local politicians who were going to the capital for an election victory rally. We were scheduled to take another flight the next day from Ulan Bator to Ulgii, the place where the Eagle Hunters Festival take and if we missed that flight, we would not get there on time. Here planes do not flight every day to the various cities; to this particular place at this time of the year, they flew in and out only once every five days. Our guide made arrangements for two SUVs to take us in a 16 hours ride across the dusty, dry and rocky desert to Ulan Bator. We had plenty water and spare tires; we had a flat tire. The trip was through a plain dusty, hot, rocky desert, with a few camels seen, a couple of small villages and an abandoned Soviet era firing range with smashed military vehicles that were used for target practice. I had been many places but this adventure for sure was the most demanding. Will describe the Eagle Hunters Festival later.
Posted by Jose's World at 10:15 PM

Nice series of images and interesting read. I like the composition of the 4th shot the best. The camel positions make it interesting. Blue Skies.

i love the pictures of the wild horses and of the sand, it seems so delicate

I truly wanted to construct a small note to be able to express gratitude to you for some of the
remarkable instructions you are giving on this website. My extensive
internet research has now been rewarded with really good information to write
about with my guests. I 'd assume that many of us visitors are undoubtedly blessed to be in a remarkable place with very many lovely professionals with helpful tactics. I feel very grateful to have encountered the website and look forward to so many more exciting minutes reading here. Thank you again for a lot of things.

My husband and i got quite contented Jordan managed to round up his web research out of the precious recommendations he was given through your web
site. It's not at all simplistic to just find yourself offering key points that many the others have been selling. So we discover we have the writer to appreciate for this. The specific illustrations you made, the simple blog menu, the relationships you can help to instill - it's everything astonishing, and it's facilitating our son and the family understand that idea is interesting, and that's wonderfully serious.
Many thanks for the whole lot!