I visited this East African country for the first time in 1997 and then returned yearly from 2000 to 20003, again in 2007 and this year. Tanzania has two unique treasures, the Ngorongoro Crater and the calving of the herds in the Serengeti during late January to early March. The crater is considered one of the Wonder and is largest volcanic caldera in the world.  Descend into the crater is by a steep road as well as the ascent. What is interesting is that driving into it the vegetation to the sides of road are mostly candelabra, cacti, whistling acacias and other kinds of desert type plants.  But in the way out, the vegetation is different and the wall of the crater is covered by vegetation resembling a tropical forest.  There are two micro climates controlled by their location in the rim of the crater. The first time I visited, the Maasai were not permitted to bring their cattle into the crater for grazing.  But this has changed and they are allowed to bring the cattle in and out daily. This is a hard life; you can see them bringing the cattle early in the morning and listen to the cows’ bells.  The wildlife in the crater is no different from that of the Serengeti other that for a population of lions that seems to have a darker mane.  Black rhinos are found here and are constantly guarded to prevent their poaching for the horns as well as other ungulates. 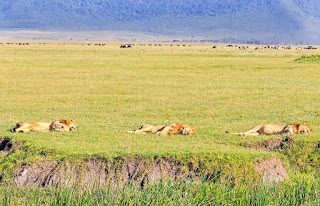 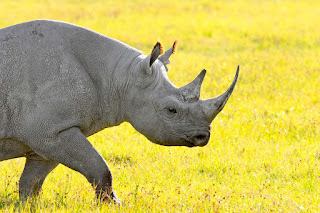 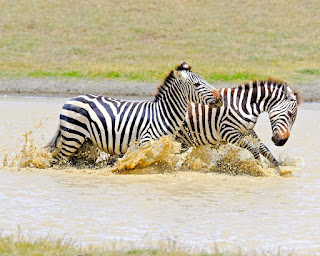 Birds’ area abundant particularly in the winter because of the northern hemisphere migrants that come here for the season.  While I there, the yellow-billed storks were getting ready to return to Europe and they could be seen circling the thermals overhead ready to head north in the evening, the next morning they were gone.  Other birds are locals and stay all year round such as the Egyptian Geese, the Black Crowned cranes and the Abdim’s storks. 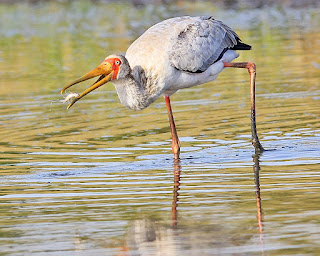 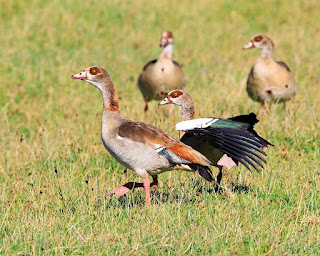 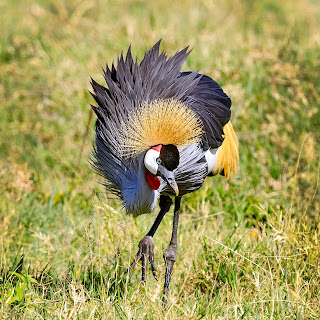 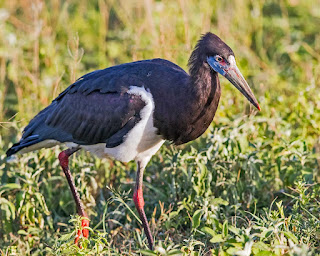 Driving west from the crater I headed to the Serengeti and after registering at Naabi Hill gate, entered the park proper.  The facilities at Naabi Hill, has grown and now there are several tented camps there as well as a trail up the hill to view the plains of the Serengeti interrupted by the rock outcrops called Kopjes.  These rocks formations are unique and during migration, one can see lions resting in the top waiting for the approaching migrating herds; once these get close, they descend for their meals.  The kopjes are also a great to spots leopards that often use them as dens to raise their cubs. 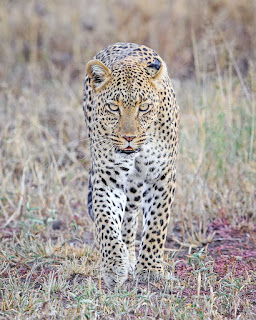 Witnessing the calving is a privilege, I was lucky to see it twice during pass visits.  This year due to the drought, the herds were dispersed and not all have calved in unison as is customary; not many calves were being born.  The dropping of the calves by both the wildebeests and the zebras that migrate together, it tied to the rains.  Still, lots of activities in the drying-up waterholes is going on.  After so many years of visiting Africa I had never seen a male bushbuck, finally one late evening at sunset there it was, walking towards the waterhole.  The male bushbucks tend to be solitary and mostly active at night; probably the reason why I had not seen one before. 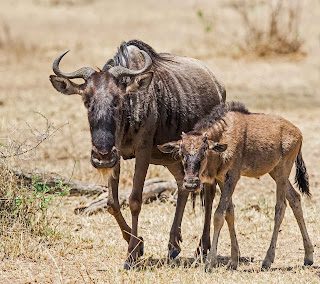 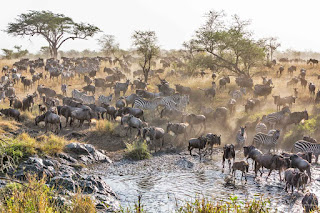 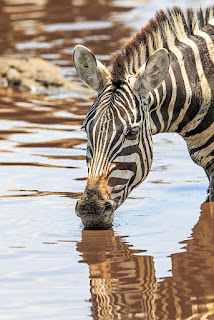 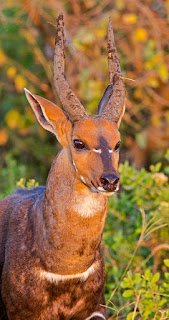 These waterholes also provide habitat for the birds to feed and built their nest.  I had the opportunity to observe the interactions between Black winged Stilts and a Goliath heron, the biggest in the world.  The heron was encroaching into the stilts nest and they were defending it.  Notice in the second image below that the heron was standing in the nest with the eggs.  The encounter went on for considerable time but eventually the heron walked away without damaging the nest. 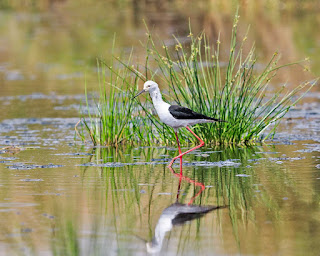 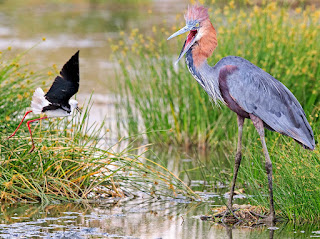 The Retina Hippopotamus pool in my opinion is the best place to photograph these animals of what I know of Africa where they can be found here in great numbers.  The best time to go is early in the morning when the light is best and the tourist tours have not arrived yet. Another plus for going earlier is that the hippos are returning to the pool after spending the night out grazing in the nearby areas. There is always a fight going on, those in the pool trying to keep the incoming ones from taking their places.  Sometimes the fights get bloody but they are mostly limited posturing with a lot of noise.  Back in 2007, I had positioned myself below the bank of the river so that I could photograph the hippos at eye level with the surface of the water.  Suddenly my drive yelled at me that there was a crocodile swimming underwater heading for me; I did not bother to looks and flew up the cliff.  I guess the guide did not want to lose an old costumer since I had traveled with him several times.  Notice in the first image below the yellow-billed ox-peckers feeding in the blood of the hippos.  They peck these wounds open but it appears not to bother the hippos much. 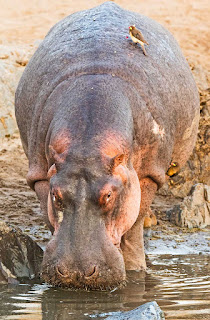 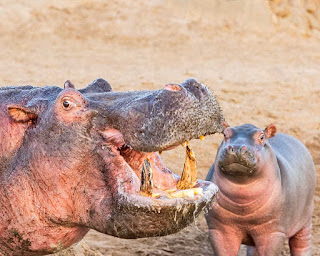 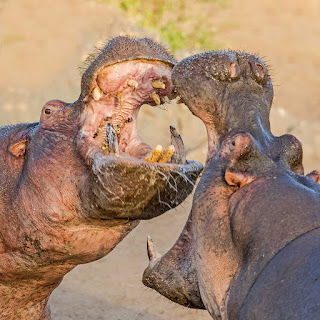 Backtracking from the Serengeti east I headed for Ndutu Lake. In the past this area has been very productive for sighting leopards and the only place I had seen bat-eared foxes in Africa.  As the rest of the area, the drought has keep everything dry of the lake, just a few wet green areas left. However, the giraffes, cheetahs, warthogs, some antelopes and the lions were there but very few elephants 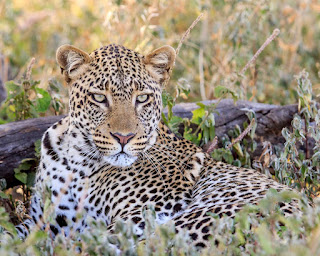 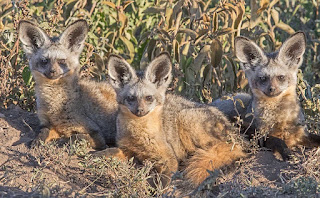 Ndutu Lake was a dust bowl and the few safari vehicles there raised large clouds of dust.  This and the heat, made the visit not too pleasant but I was greatly rewarded photographically.  One photographic safari vehicle had so many photographers that the cheetah got mad for not been tipped.  Another first for me was the sighting of a Steenbok, a species of antelope rarely seen here. 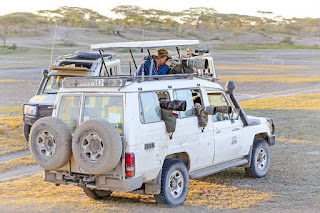 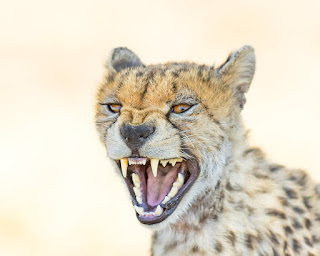 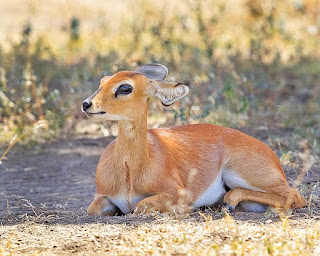 Great wildlife photographs are captured two ways; (1) by been at the right place at the right time (lucky) or (2) by stalking a subject, positioning to get the best light and framing, being patient and alert for when the action happens; usually no second chances.  I had seen the leopard below the evening before so I knew where he was and returned the next morning and found him.  I followed him and when he lay down next to a tree, I waited.  It was still cool in the morning and I knew that when it got hotter later on in the day, he will climb the tree to catch the breeze.  I got the image!!! 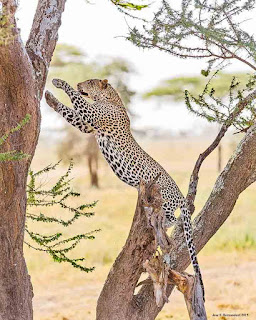 Finally I stopped at Tarangire Park, that has the largest concentration of elephants.  These giants are intriguing to watch and I spent hours with them just watching and learning about their behavior. How they protect their young, the ways they communicate by sounds, flapping of the ears, touching each other with the trunks or by the way they position them; kind of a sign language.  How many elephants in the first image below?  The second image shows a young ones playing with dried mud balls.  The one to the right will pick a ball with its trunk, put in its mouth, rolled around and dropped it.  Then will repeat the process with other ball again and again. Notice the younger one to the right also playing in the dirt…just like human children. 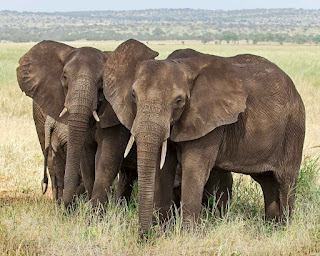 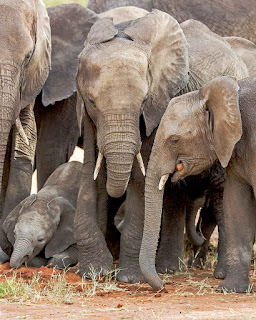 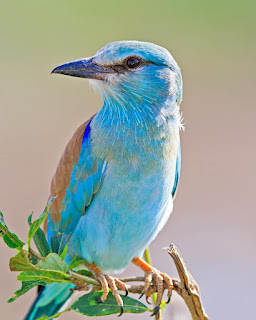 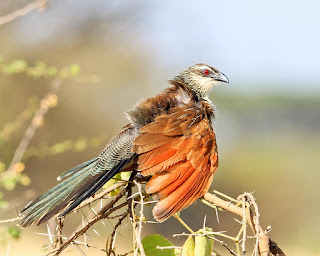 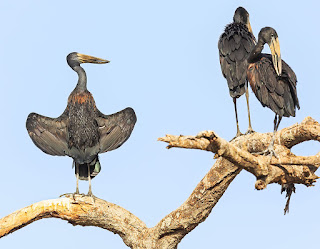 The info on the vegetation in the crater is very interesting Jose. As Black Rhino are browsers and usually like thick bush, are they easy to spot? I see you picture has one in grasslands?

I find it interesting that the Wildebeest and Zebra there have a specific season during which they drop their calves. In KNP, calves are born throughout the year?

Great action shots between the Goliath Heron and the Stilt Jose.

Great post and awesome sightings. Gives me a desire to explore more of Africa.