The Fires at Torres del Paine. 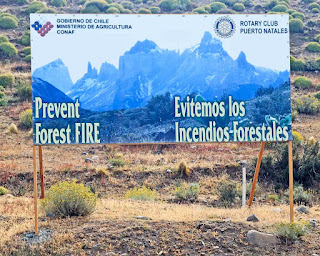 A disaster, crime or just plain negligence.  According to the official news the fire was originally blamed on an Israeli soldier on vacation; now the culprit was a Czech tourist according to the official CONAF website, the Chilean government agency responsible for the parks.at http://www.torresdelpaine.com/ingles/secciones/noticias/11.asp.  Regardless of who ignited the fire, the Park authorities are blamed for not timely controlling the fire. The “expert politicians” started to arrive from Santiago and took over the firefighting operations. These “experts” were not familiar with the park and ended up been guided by the local hacienda owners and hostel staff to fight the fires. There was a lot of resentment by the local tourist operators due to the closure of the park, and as always, some got exempted from closure due to political contacts. And yes, I being one of those tourists, I suffered too; more on this later.  My perception was that the governments over reacted by originally closing the whole park using the excuses of safety and to facilitate the firefighters work.  Eventually some trails were reopened but the park remained closet to vehicle traffic while I was there. 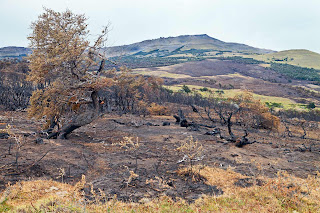 CONAG current party line (as of March 2012)   is that things are back to normality; that the damaged forests and the lost to the local economy and the tourists who lost their time and money are whole again!!!  There was heavy criticism of the park rangers at Torres del Paine and of CONAG, the agency in charge of the Parks in Chile; they were not prepared and took too long to start firefighting operations.  Allegedly, the rangers spent most of the time performing administrative tasks such as collecting park fees at the entry gates rather than policing the trails to protect the flora and fauna as well providing assistance to the trekking tourists.  And also charges that most of the revenue collected from the park entry fees are nor reinvested in the park, but go somewhere else. 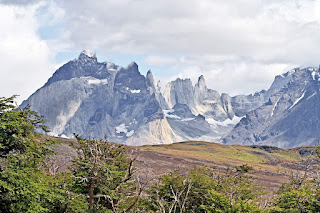 I witnessed some of the destruction caused by the fire as well as CONAF firefighting activities.  The Chilean military responded to the emergency and I saw many of their soldiers actively involved in putting out fires.  One of the problems that they faced was that once they put out a fire in one area and moved on, the fire in the former area came to life again.  High winds at times between 100-140 KMH added to the complication of fighting the fires. 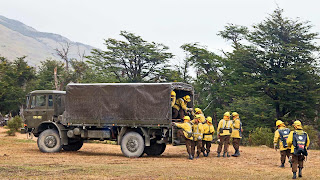 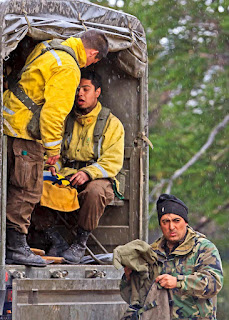 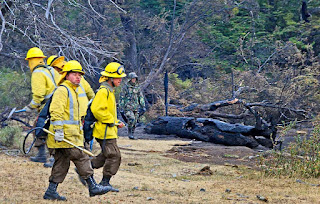 I spent a week in the vicinity of the park unable to enter it because of the fire; I had to wait for an upcoming cruise of the Magellan’s Straits the next week.  Arrangements for visiting the park were made 3 months in advance and all fees paid for and the various hosterias within the park including meals.  My tour guide had warned me of the problems in the park a few days before arrival, but there was no alternative, so upon arriving in Punta Arenas, proceeded to the park.  The first night was paid and reserved for Estancia Laguna Amarga hosteria.  This hosteria is outside the boundaries but close to the park so it was open for business.  We had reservations for 3 rooms with private bathrooms but when we arrived, they have given 2 of our rooms to an Italian tour group, and moved all four of us to a single room.  We protested and the response was “take it or leave it” and refused to credit the payment for the stolen rooms.  We left upon the insistence of our guide, who found accommodations at a superior hosteria farther from the park where we arrived after midnight. Our tour operator assumed the extra cost of this alternate facility.  Reservations for the two other hosteria within the park were also prepaid and lost, but since the park was closed by the government, they refused to refund the cost of the rooms. 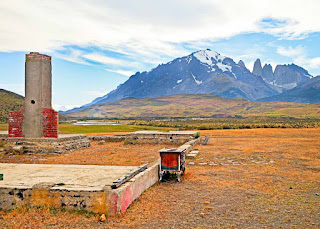 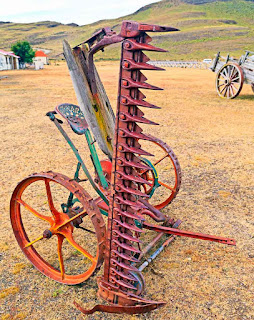 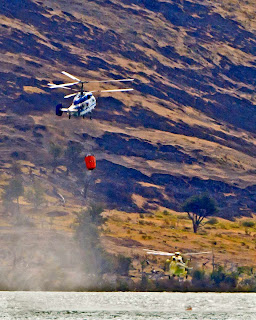 Helicopters (above) were heavily used to fight the fires and I photographed these birds filling their water buckets at Laguna Verde repeatedly and flying to the fires to dump the water.  This was a costly and lengthy operation; I was told that the cost of keeping them flying was $4000/hour. The helicopter firefighting operations were observed from the estancia Lazo and while there, the young cowboy (image below) riding a spirited horse was thrown off the horse.  His father came in an ATV and drove him the home, he appeared to be fine but was taken to the doctor in Natales next day.  I stayed at the estancia for a couple of nights, a friendly family run place with rooms with great views and excellent food.  While there saw this “pecho colorado” that in English means “red breasted” but the proper name is ‘white browed blackbird”. 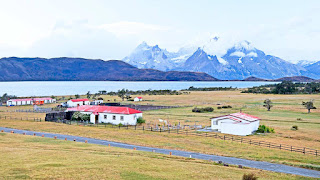 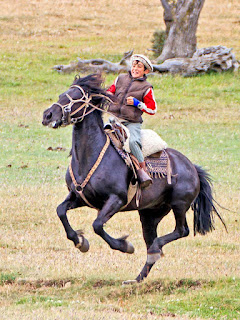 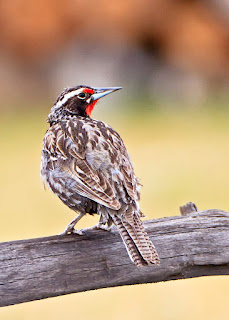 Traveling in the vicinity gave us opportunities to photograph the wildlife.  It appears that the guanacos were at the top of their romances season was able to observe the related activities.   These animals are always a pleasure to photograph as well as the lesser rhea.  There were also opportunities for landscapes imagining, although not as striking as inside the park proper, still beautiful to photograph.  Horseshoe bends are one of my favorite geological formations to photograph are created by the flow of old rivers.  The third image below was in the Rio Paine, just below the Cascada Paine; it took a bid of a walk to the edge of the river but I got the image. 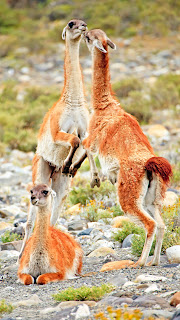 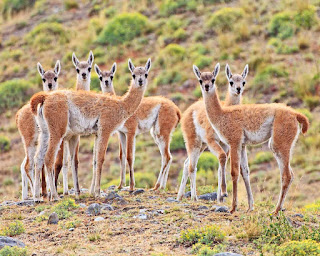 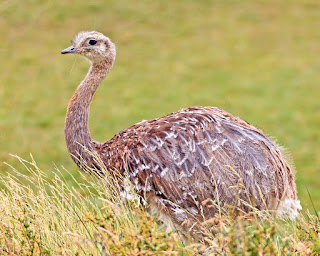 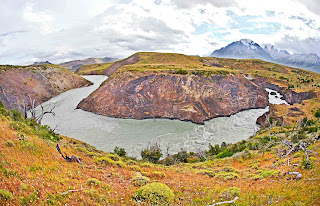 Laguna Amarga was a challenge to photograph due how wide it is but it was eventually capture in all its majesty with a fisheye lens; there were flamingos and cauquens in the lake at the time of the visit. 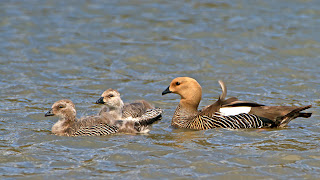 Another alternate hacienda that we stayed outside the park was Cerro Guido (www.cerroguido.cl).  This was an old sheep hacienda that still operates and had the opportunity of visiting to the old buildings where they shear the sheep.  The old steam engine has been replaced by a modern gasoline motor but the old system of overhead pulleys to power the shearing equipment is still in use.  The hacienda is a self-contained small town with a school, police station and houses for the workers.  And then a surprise, the Kaw Restaurant, with an outstanding chef that prepared culinary dishes that were works of arts to the eyes as well as gastronomically delicacies.  A great selection of Chilean wines was a perfect addition to the meals, along with the views of the Needles of Cleopatra (currently known as the Horns of the Devil).  It is amazing to find such a high class restaurant in such an isolated place; an oasis. 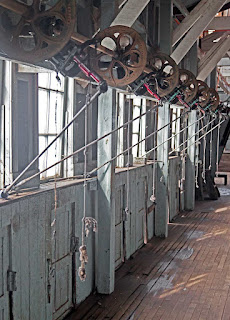 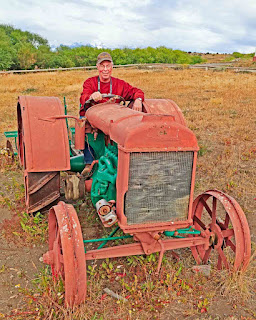 Travel has its rewards as well as challenges and I have learned to deal with them by being patient.  Despite the fire at Torres del Paine, it is still there and the “Horns of the Devil’s” as majestic as always, but the forest fire wounds will not heal in my lifetime.  I do thank my tour operator for providing alternatives activities while the park was closed at no extra cost.  Yes, I will return but not to those hostales that did not honor reservations or failed to refund payments using the fire as an excuse. 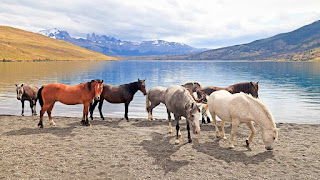 Forest fires are bad!! I have had my share of fighting them - one lasting three days and nights and know how they can flare up again in places where you think they are out.

My goodness Jose, what a disaster to this holiday of yours!! I do agree with you about not returning to the places who did not refund you but dealing with government departments are a pain in the you-know-what!!

At least the whole trip was not wasted as you would not have otherwise found that lovely food and wine!! :)

As always, stunning pics, Jose! i related to the firefighters since my son in law is one. You know me but under another name, this is my new blog.

Those are excellent photos. I think you can add corruption to your first sentence! And you definitely get an award for the strangest comment on my blog :)

Jose, why are you writing me on Al's blog???

Great photos…I felt like I was taking a walk right there with you!