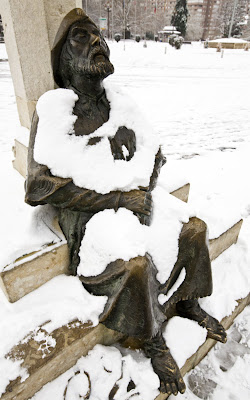 As the first decade of the XXI Century ends it is time to reflect what it brought to my photography world. The most obvious is the rise of digital photography earlier in the decade; it is the most radical advance in the history of capturing images. This technical advance allowed for almost anyone to become and instant photographer. Being at the right place, at the right time can make anyone take a professional photograph. It has made me a worst photographer, now I indiscriminately shoot anything without paying close attention to composition, exposures or subject matters. I have Photoshop to crop, correct exposures and enhance the images when I get home...this was not that easy or cheap in the age of film. And what happened to all my film slides of the previous century? Earlier in the decade I used to scan a lot of them but soon I stopped. Now they just seat in boxes fading away but provide me an excuse to revisit old place to get digital images. 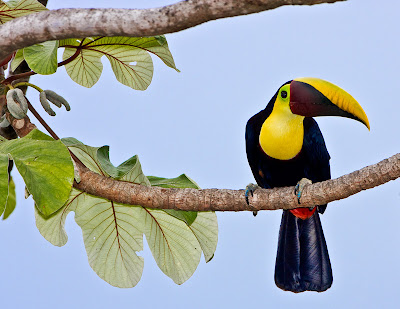 Birds is what brought me into photography originally and has taken me to various corners of the world. Travel expanded my horizons into other types of photography such as landscapes, buildings and people. No doubt birds are still my main focus as shown above photo of a cusinga in Costa Rica. 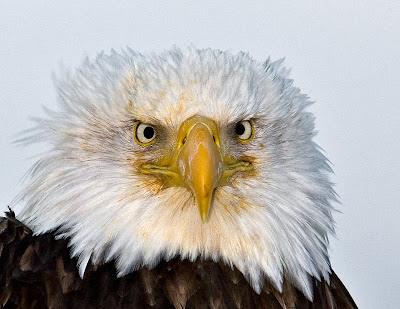 This image of a bald eagle was taken in Homer, Alaska in 2008. There was a wonderful lady there that used to feed the eagles in the winter and photographers from all over the world, congregated there in the winter to capture images of the wonderful birds. I was privileged to meet this lady, who allowed me into her private world by assisting her in the defrosting and cutting of the fish to feed the eagles. I had bought some booths that protected the feet to -32 F temperatures; they did not work for me. So to the local sports supply store I went and bought some knee high booths with 1 inch thick inner liners. These were supposed to protect my feet to -78 F temperatures...but I still had cold feet. 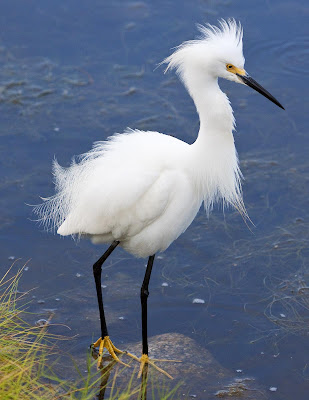 Birds are the most challenging to photograph, particularly white ones. The snowy egret was photographed in Huntington State Park in South Carolina. This is a not widely known place in the bird's lovers world. I had visited here since the early 70's and at that time the park was not well developed or often visited but wildlife seems more numerous and easily approachable now.

The quetzal above is a bird that I first started chasing in 1975 in Central America, and finally got
the opportunity one day in Costa Rica in 2007 to be see one morning. Unfortunately it was a foggy morning but the joy of seen 8 quetzals on a single tree was elating. 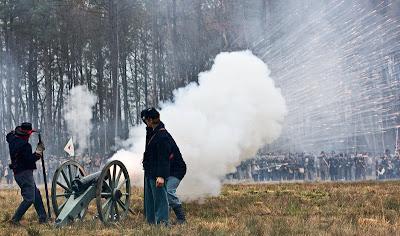 The Civil War is still going on the the Southern States and living in Virginia, photographing these events has become a late habit. The participants are really re-living those times and their clothes, weapons and camps are close reproductions of those of the past war. Even in their language they sound archaic. The expense of their outfits I am sure triple or quadruple the value of my photographic equipment. 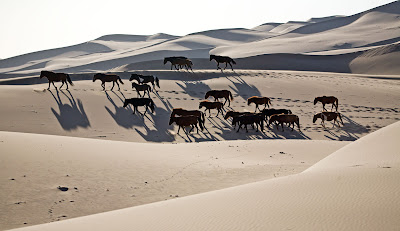 During the last decade I visited more countries than my previous 3 decades of travel. Of these countries, Mongolia remains the most vivid in my mind. I had never been so cold and hungry in any of my previous travels, nor in such and adverse environment as it was in the Gobi desert. Even in Africa, all the amenities of life are available while camping in the bush. Here, electricity was randomly available, drinking water scarce and food was spartan. But it was worth it, the Mongolian people are the most hospitable and friendly as well as colorfully dressed. I never had interest in horses previous to my encounter with the Mongolian horses in the Gobi. On a freezing morning I was photographing a camel caravan with the sun behind my back. For whatever reason I turned back, and a stallion with his harem was coming down one of the sand dunes. A sight of a lifetime, not planned, I was there at the right place at the right time and happened to find myself with images and memories to cherish in the XXI century. 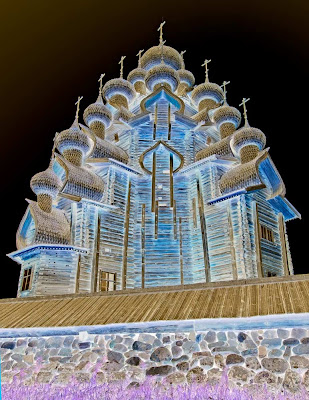 Russia was a new country to me the last decade. What a fabulous place with such a tumultuous history. My perception of history has changed several times as I visited countries such as Egypt, Italy, China Mexico and Peru due to their ancient civilizations. Imperial Russia was something unexpected, its wealth are so powerfully expressed in its churches and palaces; this is not matched by those in the empires western Europe. Previous to visiting here, I thought that Paris was the first City in the World, now I have conflict as to if it really Saint Petersburg, even thought I was assaulted and robbed there. 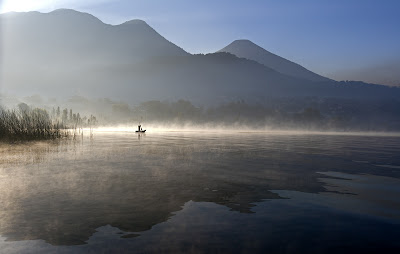 The highlands of Guatemala is one of those places in the world that are unique for me. The descendants of the Mayas that live there are very creative and have a way with colors in their clothing, potteries and jewelry. And this is enhanced by the mountains and forest in the area. And there is Lake Atitlan, there is no place in the world with such richness of contrasts among the clothing worn by the of the Indians living in the various villages around the Lake. You can tell where they are from by their outfits, unfortunately this habit is disappearing although still mostly preserved by the women, most men dress now Western style. I first visited Lake Atitlan in 1975 when it was still a very isolated area, not tourist hotels, no waterfront street full of restaurants and no water pollution. I was lucky to see then the Atitlan Grebe, now considered extinct as well as my first fresh water crabs; how did they get there? 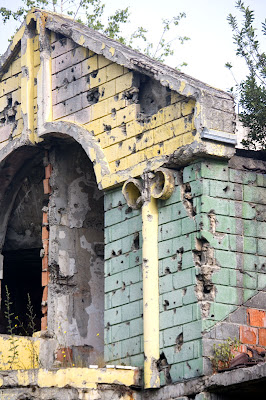 Sarajevo was another of those shocking experiences of my photographic encounters of the last decade. Here for the first time I had seen a modern city destroyed by a recent civil war. Beautiful abandoned buildings just full of cannon and bullet holes, the scars of tribal wars. Some places seem to be cursed by history, the First World War started when the Archduke Ferdinand of Austria was assassinated here. The spot where this happened is now a mandatory tourist spot with the proper museum nearby to remind us of the curses that the political struggles impose in their societies. 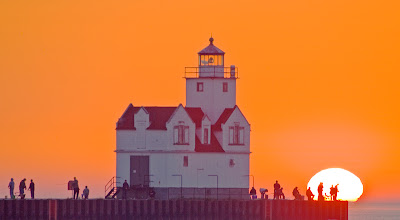 As the second decade of the XXI rises who knows what fish we will catch but as they say, the early bird catch the early worm, so I will be hitting the road again looking for whatever subject happens to catch my eye. As more photo equipment comes into the market, I will be debating
what to get and what to get rid off. One thing for sure, the more lasting value in the photo equipment are in the lenses, the camera bodies and computer hardware/software follows Moore's Law and becomes obsolete in 18 months. But it seems that for digital camera bodies, the obsoleteness is being compresses to about 12 months. 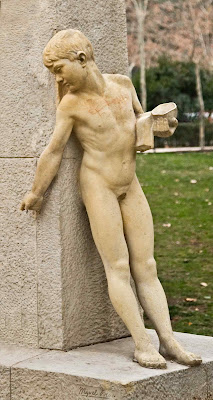 So come and visit sometimes and see what images are coming around the corner this second decade. Will enjoy hearing from you, so comments are welcomed. Happy new Decade!!!
Posted by Jose's World at 12:53 AM

What a wonderful post Jose. Here's wishing you a BRILLIANT 2010 with lots and lots of joy and happiness. I look forwards to seeing what the new year is going to bring from you as you go to such exciting places.

I will come and leave you another comment on this post but I have just got back and wanted to wish you all the best before anyone else does. LOL!!

A beautiful way to close out the decade. Have a very prosperous new year.

That is a very interesting synopsis of your years experience and looking at your website I can see the fascinating places you have been to. Images like the one of Lake Atitlan tell a whole story in itself and I think you should write a book of your experiences along with your fantastic photographs.

Writing a book? That is work!!!
Then I will have no time to take photos. Glad you enjoy the blog, just emulating a greater blogger.

Am glad that you're sharing some of your personal experiences here - it enriches your photos even more, when you tell something about the background/culture/people!
Bytheway do you have some photos of the Mongolian people?

Your blog is magnificent, superb pictures...
Love and light
solange

i actually love your writing type, very remarkable.
don't give up and also keep writing since it simply just very well worth to read it.
impatient to looked over much more of your articles, have a pleasant day :)