The West is Red 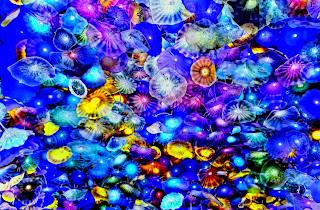 Last fall I took a photographic tour with friends of the major parks in the states of Nevada, Arizona and Utah. I flew into Las Vegas where I spent the night and took the opportunity to take photos of the city. To the right is an example; it looks like a sea full of jellyfish but is really the ceiling at the Bellagio, one of the many casinos in the strip. The next morning I departed to the Grand Canyon via Hoover Dam. Since I was at the dam last time, photographing the spill side is difficult now since they had installed a glass wall that does not allow anyone to bend over the rail to shoot down.
The Grand Canyon is almost as I saw it last 28 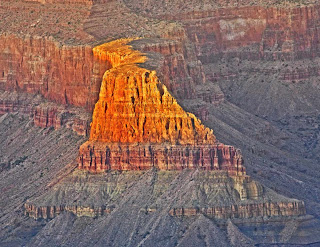 years ago. There is no photograph that can really capture the magnitude of its size or the rainbow of colors. I spent 2 days here and the best time to photograph are at sunrise and sunset. The rest of the time just drive around trying to find sites to photograph later at the times of best light. In the nearby town of Tusayan there is a National Geography Society (NGS) Theater with one of those huge screens showing the wonder of the Canyon. And if you are an aspiring landscape photographer, you can get a tour and lessons there from the NGS experts. I did notice that there is a haze in the air that do not recall from my first visit. There is no way I could remove it with a filter or by using Photoshop that I know...help!!!
Next I went to Bryce Canyon where thousands 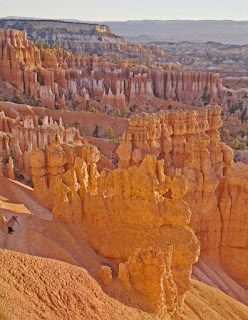 of hoodoos form rows of towers than remind me of medieval castles in Europe. This park again is at its best early in the morning and the place to go is Sunrise Point, that overlooks Bryce Amphitheater; it is big enough so there is no rush to get a choice photographing spot. Once the sun breaks, you can walk down into the Queen Garden Trail which is not a difficult one to negotiate. This trail is very rewarding, offering opportunities to photograph the Twin Bridges in one of the small canyons and Wall Street (no brokers here). During hours of the day not conducive to photographing it is worth to drive to the the various points but making sure to return in time to Sunset Point to catch the sun going down. In the image to the left, gullies can be seen between the fins that support the hoodoos, the pillars of rocks. These are created by chemical and water erosion.
Fast running water carries the soil away and seeps in between the cracks of the rocks where its freezing and thawing action shapes of the hoodoos.
In the way up to Arches, I stopped at Kodachrome 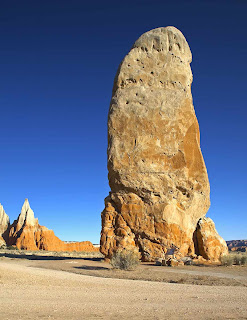 Basin, a state park, named after the famous Kodak film by an NGS Expedition back in the last century due to the contrast and vivid colors found in the area. There are several monolithic sand pipes as high as 170 feet. The one featured to the right is an HDR image of the pipe known as Chimney Rock; the same rock was photographed by the NGS and appeared in the National Geographic magazine issue of September of 1949. If you check the magazine, there is no noticeable change in the rock other than the color, mine is not as red as the one published. There is a sign by the rock providing the above information as well as a photograph of the rock. There are arches in this park as well as other colorful mountain ranges, one can be seen to the left of the Chimney Rock in the photo presented. On the way to this park there are lots of interesting sites to photograph such as abandoned all houses and at the Park Headquarters, large number of mule deer can be seen at sunset. After departing this park late, I was lucky to get the last hotel room left at Hanksville to spend the night.
Arches National Park was the next destination, another site that I previously visited, and the air 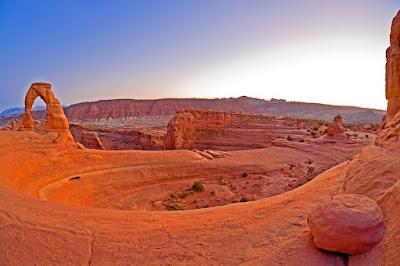 was clear and not hazy as experienced
at the Grand Canyon. Stayed at Moab
that was a sleepy town at this time of the year, with lots of restaurants but most of these were closed for the season. Arches is a magical place with great opportunities to get stunning images with a bit of patience, a tripod, the right lens and camera. I said patience because even in the fall, there were many visitors, and to get a great photo, one must wait for them to move. To the right is an image of Delicate Arch, the result of the magic of HDR photography.

Nearby at the the Canyonlands National Park is the 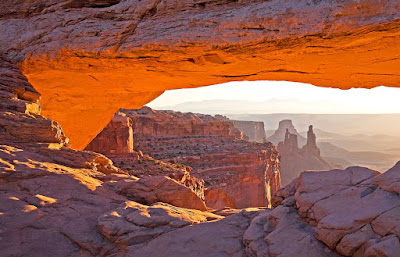 famous Mesa Arch. This is a place photographed by the "Who is Who" in the world of landscape photography and I am sure you have seen it several times. The morning I was there, there were photographers lined up along the length of the arch with no space to spare. Some with large format view cameras, doing it the old way. Aspiring wannabees like me had to sneak in between the huge tripods under the threats that if "you touch my tripod I will...". Well, I survived without being impaled and got a sample photo to the right.
Finally I reached Zion National Park, a magical place. There were trees, grass, waterfalls and red was not the dominant color of the landscape. I got here when the trees were at their peak of fall colors and the weather was perfect. I spent most of the time photographing the Lower Fall in the Emerald Pools Trail, this is the largest and most photogenic than the Middle and Lower Falls.
This was my favorite site of the whole trip and samples for you to judge are below (sorry but I am having a terrible time lining up the images in the Blog). 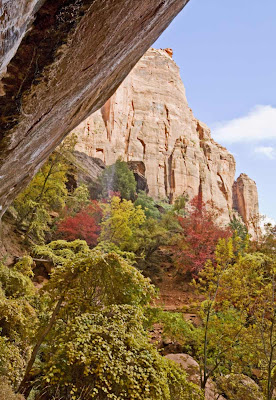 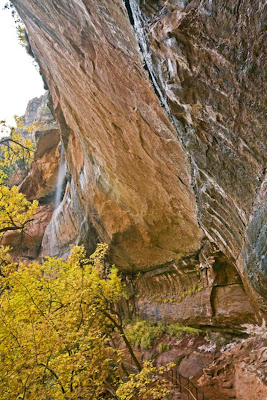 I called this Blog the "West is Red" because red is the predominant color in that part of the country. I had a difficult time trying to adjust the color in the images to eliminate the ever present red cast. And finally, I must thank my photography mentors Ed and Manuel, who patiently waited for me past sunset every day, and did not leave me behind.
Posted by Jose's World at 8:51 PM

What a great set of images and wonderful comentary as well. It's great to hear the stories behind all the images. Gives them "life". I especially like the shot of the Mesa Arch. Quite beautiful...once again! gidje-

You are quite the blog king Don Jose. Exceptional series of images and commentary. The orange rock Arches shot is my fav. Blue Skies.

Hello Jose. I was just asking Ken what has happened to you as I was looking foward to more of your stunning images.

The Grand Canyon - what can onse say about them. This is my favorite place in all the world. The colors and formations are simply stunning!! There is no place like it for me. The first time I saw it I started crying (like an idiot) at the sheer magnificence of it.

The Arches are stunning too but my favorite is the one of Messa Arch. Totally beyond words and defy description. I am glad you were not trampled and got out of there safe and sound. :)

Thank you for this magnificent article again Jose. What a pleasure to see all these brilliant pics.

If I may give you some advice here: First load your pictures one at a time starting from the bottom one and then go and add your dialog. It works much better that way. To delete the large space at the bottom, just click on 'delete' until you see that most of the lines are gone. If you need any help, please feel free to ask. :)

Great stuff, Jose. You have pretty much written the road map here of a trip I'd like to take myself one of these days. I saw one of your comments on Ken's blog and decided to check yours out as well. It must be tough when you envision a certain photo and travel to the place, only to find a crowd of people there with a line of tripods set up. I can relate to that myself.
Best regards...

Awesome photo's Jose! I really enjoyed reading about your trip and seeing the photo's.