Whenever anyone think about Costa Rican frogs, the red-eyed ones come to mind. Frogs are 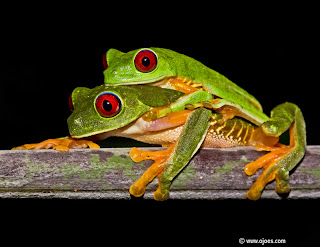 not easy to photograph and very difficult to find. I spent hours looking for them and listening to their calls, and when I got close enough, they stopped calling. The best time to look for them is near water just after sunset where they start looking for mates and food. They can be found on leaves but most frequently underneath them, making their photographing most difficult. I went out 5 nights and was able to find frogs only twice. I set up my camera in aperture priority at f 8 or 11 and ISO 400 with a 150 mm micro lens and a shoe mounted flash set to Hi Speed Sync. I rigged the flash with a Petzl Tikka XP attached with Velcro to the top of the flash so that I could illuminate the subject for focusing. I also used a diffuser attached to the front of the flash. The 150 mm lens gave me about a foot of distance to work with. The focusing was done manually by moving the camera back and forth until I could see the frog's eye more or less in focus; I left the fine focusing to whatever I could obtain from the depth of field achieved from using small f stop openings. Needless to say, lots of shots were wasted. 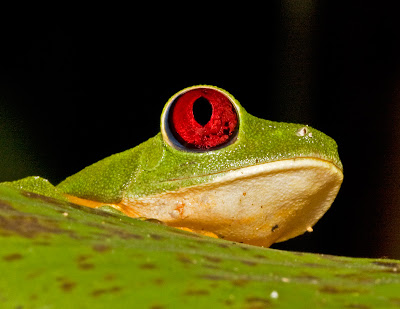 Although I had been to Costa Rica several times, I photographed these frogs in November, which is considered the rainy season there; I do not of the odds of finding frogs at other times of the year. These frogs seem to stand still at times but in occasion they move constantly making their photographing very difficult. All the time I was with them, they did not appear to be interested in eating but in finding mates. The male will seat in a choice leaf and inflate its throat like a balloon and sings to his heart contents until the girls came around. Some of them took a look at the charmer and keep going; maybe his serenade was not to their liking. I was lucky to get a mating pair, they did not mind me at all; the female will move around carrying the male on her back; this situation took as long as an hour. 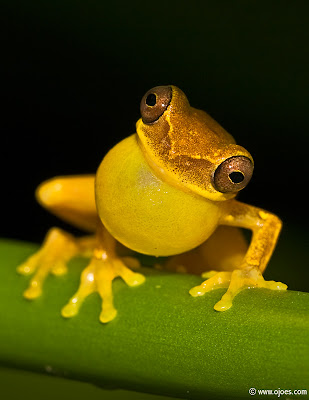 Of course not all the frogs were of the same species and I found the one to the right the most appealing.
He was very tenacious and stayed calling for mates for a long time but I did not see if he was successful in attracting mates. Frogs are having a difficult time now a days and it is blamed to the greenhouse effect. They seem to be mostly affected by viruses, fungus and other agents. There is not a real consensus as why this is happening but their disappearance will be a great loss since they feed mostly in insects and they in turn are eaten by birds or humans (in the case of bull frogs.)
Costa Rica is a photographers' paradise with a diversity of ecological niches in the mountains, the Caribbean and Pacific coasts, which are quite different. I found the Pacific most rewarding when it came to photography. Birds are the major attraction for photographers and there several ecological reserves available with nice forests and accommodations. Transportation is a challenge due to the conditions of the roads, particularly in the rainy season, when the roads may get washed away by flash floods. A four wheel drive is highly recommended as well as a GPS since most streets and road are lacking road signs. And beware, you never know when a frog may mistake you for a meal. 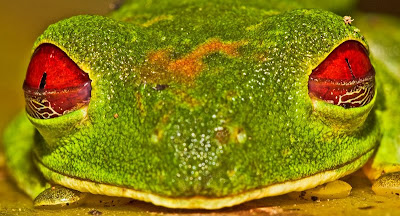 Hello Jose. I have been looking out for another of your great posts. These pics are excellent as usual.

What kind of diffuser are you using? Something bought or home made. I use a cut up milk bottle for my insects and it seems to work as well as anything else around.

What charmers these frog are. :) I wonder if I could resist a man coming around and singing his heart out to me. :) I love the sound of the frogs and crickets at night. It is music to my ears and makes me drift off to sleep very peacefully. When I still worked in the bush, I also had the lions, hyeans and zebra sounds which make ideal conditions for me.

The results of fungi infections on the frog populations the world over is devastating, even here in South Africa. We also have people watching developments but I have to wonder at that which they are not seeing. How many species are dying out without us realizing it? A very sad state of affairs.

Costa Rica is a place made in heaven for the wildlife or nature photographer. It is one of the places I have not yet been to though, but here in Africa, we also have as many species as they do there. I would love to go in and photograph the insects there. They must be amazing in color and variety.

I love the yellow lines in the frogs red eyes. Nature is truly fascinating. Do you know if these frogs are poisonous? I would think so judging by their coloring.

My goodness, I have never done such a long comment to anyone!! Just goes to show how intresting I found you post. LOL!!

Keep it up please Jose. I love what you have done sofar.

Don Jose, what an exceptional post. Great collection of images. The bottom shot is my fav. Blue Skies.

Love the bottom two photos. They show great character. I as well have experienced the Costa Rican travel experience. The country has such a diverse terrain and climate fluxuation that it's a photographers paradise. We saw alot of the poisonous frogs species that were about the size of a dime. Learned they liked bananas!

I came from Joan's blog and this is a perfect post for me. I love frogs and I am learning the frog calls of my NY area so I can participate in FrogWatch. I know we have the larger bull and green frogs, but the others are harder to identify when they are back in the woods....Michelle

Great to read your post and see you wonderful photos! Best wishes, Andrew

I think that the frogs are very interesting animals and the pics show us very well. Costa Rica is a beautiful country, I was looking for buy lots in costa rica because is the perfect place for all!

thanks for adding me to the forum[url=http://us-pos.hr/forum/index.php?action=profile;u=1245
].[/url]

Once upon a time air travel was a great deal simpler than it is today. You called one of a few airlines that flew from your airport, the agent would tell you what flights were available for a given time, and you booked the one you wanted. Airports were always bustling places, especially during the holidays, but as long as you gave yourself adequate time, the process was usually the same. You would check your bags, go through the x-ray machine, get your boarding pass, and wait patiently at the appropriate gate. Once you got on the plane you ate the snack or meal that came with your flight and watched a movie.

In recent years travel by plane has become significantly more complicated. There are so many different configurations for flights and types of fares. Dire economic circumstances have caused airlines to raise rates and charge extra fees for everything from baggage to blankets. There are complex rules about what you can and cannot carry in your luggage. It can be very difficult to determine whether you are getting the best deal or the best services when you buy an airline ticket. The internet makes the navigation of airlines, airports, and flight itineraries easier, but, even so, be prepared to do some research if you want to find a flight at the best price.

Here is something up front that might save you time and money right off the bat. If you are traveling within the United States mainland, always look at Southwest Airlines first. Southwest is almost always the best deal you will find. However, Southwest itineraries do not appear on the major travel websites, so always go directly to the airline's website for information. Plug in your travel plans, and you will get a list of all the flights that are available. Southwest typically charges more reasonable prices than other airlines, and there are no hidden fees. The price you see is the price you get although tax and the government fee that is attached to all flights does apply. For lower prices than you can probably get anywhere else look at the "web only" fares, but keep in mind that these fares are not refundable.

I like your blog so much, and there are just some differences with others'. Hope there will be more wonderful things in your blog. Happy every day!

greetings to all.
I would first like to thank the writers of this blog by sharing information, a few years ago I read a book called costa rica investment in this book deal with questions like this one.

Hi everyone! I'm originally from London but am living in Berlin at the moment.
Gotta like this place!

just signed up at joseherworld.blogspot.com and want say hi to all the guys/gals of this board!

I would like to thank You for being the member of this website. Please allow me to have the possibility to express my satisfaction with Host Gator web hosting. They have professional and quick support and they also offering many [url=http://tutorialtime.info/hostgator-coupons/ ]HostGator coupons[/url].

People say there’s delays on flights. Delays, really? New York to California in five hours, that used to take 30 years, a bunch of people used to die on the way there, have a baby, you would end up with a whole different group of people by the time you got there.