For a decade I had gone to the Big Apple during the month of October and due to the COV-19, the tradition was not continued in 2020. New York City is always a transitional place that tears down the old and at times transforms it. During the past few years PhotoPlus has enhanced my reasons to visit it but in 2020 it was cancelled. 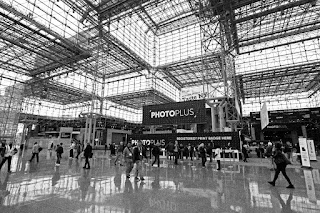 Hudson Yards is a new development inaugurated in March 2019 in the West Side of the City.  It consists of the East and West Yards with the former inaugurated in March 2019 and the latter to be completed by 2025 if ever due to the present COV-19 impact in the economy.  It is a privately developed complex (if you want to believe that since about $6 billion came from various governments’ tax breaks).  It was built on a platform over the yards and tracks of the various railroads servicing the city, a great engineering accomplishment. 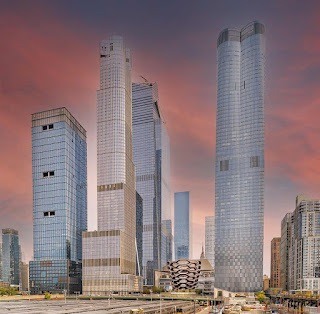 The Vessel is an artistic/architectural marvel that has no practical purpose other than an attraction to anchor the whole Hudson Yard’s complex. It can be visited for free and to reach the top there is a 2500 spiral staircase but for the faint at heart there is also an elevator.  I would have named it the beehive instead that I saw under its construction and couldn’t figure out what it was going to be. It is a marvelous structure but underwhelmed by the surrounded edifices; it would have been more awesome if located in an open space just next to the Hudson River. 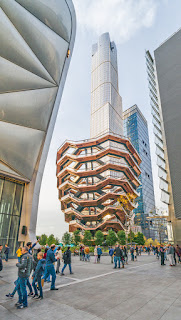 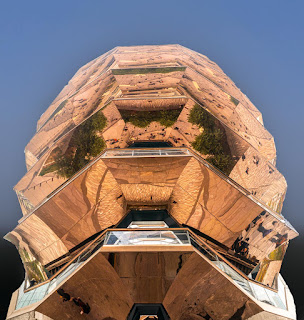 The Shed also part of the Yard’s complex is a movable cover that when opened forms a 2-storied space called the McCourt designed to hold open space events with a seating capacity of 500.  It is mounted on 8 wheels that carry the weight of a steel/plastic shell of 8 million pounds and can be retracted in about 5 minutes.  Second image below shows the roof of the Shed looking up to surrendering buildings that host apartments and office spaces. 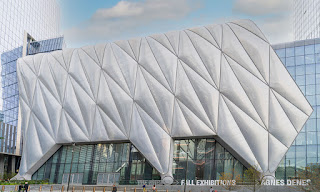 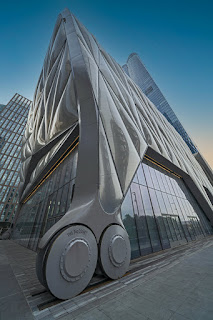 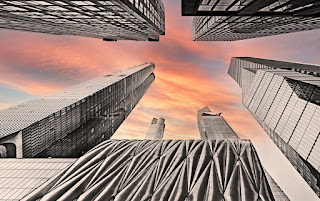 Neiman Marcus was the anchor retailer for the complex with a 50-year lease that just operated for just 16 months since it went bankrupt due to the COV-19 impact and the transition to E-commerce.  At the time of the visit there was a large display of mannequins…a shame to see it all gone. 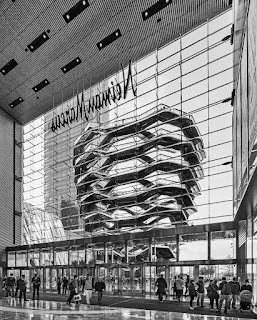 The beauty of the Hudson Yards is that it can be reached by the High Line created in 2009 from the elevated tracks of the abandoned of the NY Central Railroad. It is mostly a park along and its paths older and newer buildings are located.  It is about 1.5 miles and meanders along the Jacob K. Javits Convention Center and the Hudson Yards Development (both pictured above) and ending at the Whitney Museum at the north end. Below an image of one of the building walls decorated with street art and next a row of bikes taken down from the High Line, 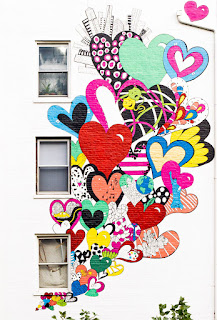 Trees and grasses are planted along the trail and in sections some of the original tracks are still visible. Some small ponds were also included as well as benches for taking a short rest.  It is a photographer’s paradise from the views provided from the trails with a variety of view to include city landmark buildings such as the Empire State building and of the Hudson River. At times cultural attractions are available such as peddlers selling their paintings, photos and textiles and an occasional performances.  Ran into a group of photographers from Roanoke, Virginia. They were taking a rest, and reviewing the loot of free items given away by the various vendors in PhotoPlus 2019. I took their address and promised to send them a picture…as usual I lost it. 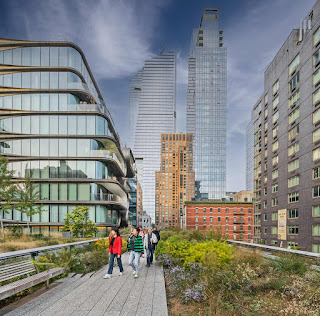 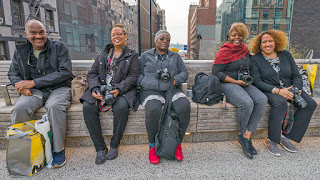