When I was in Bosque del Apache in 2015,  I said I was not returning after visiting there several times.  How many images of Sandhill Cranes and Snow geese can one have? But the bad influences convinced me to return just for the fun and to photograph the birds flying across the December 5th supermoon.  So I found myself there again freezing in the early morning to watch the geese so called eruptions when they lift-off in unison to go and feed in the cornfields inside the parks and nearby farms.  Yes, it is spectacular and in particular the noise.  The sandhill cranes behave differently since they depart in family groups; they are very interesting in their behavior when flying - always communicating.  Can you tell the juvenile in the last image below? 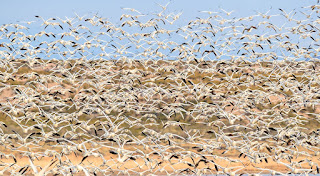 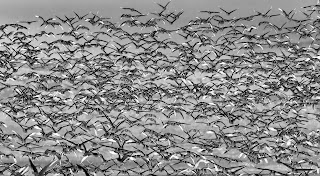 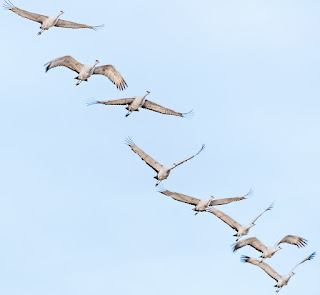 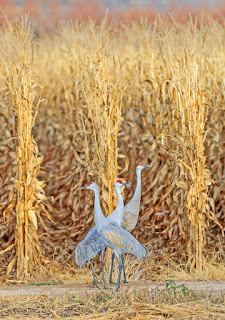 There are other birds in Bosque, as the Great Blue Heron below; these are territorial and one is assured to find them in specific places in the park…just like seeing an old friend.  The California quail is also interesting and always communicating in the underbrush; you don’t see them but they are there.  You probably have seen their photos from Bosque sitting on an old stump by the park’s headquarter; photographers fight for the choice place to get a shot. There are also less attractive birds such as the white-crowned sparrow. 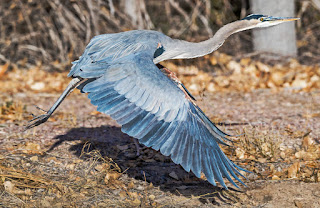 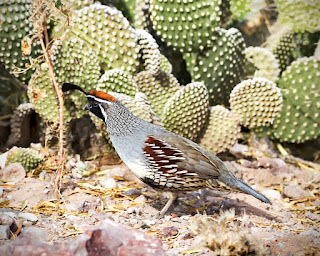 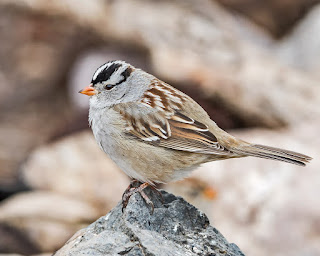 Bosque is also a rewarding place for scenery photography, but so is the whole of the New Mexico.  When I first started going there I found it ugly and polluted with abandoned farming machinery, old trucks, campers, trailers and collapsing adobe houses.  But it has grown on me now.  As most other nature places in the world the crowds are ruining the experience. The photography tours think they own the place with the hyperactive guides running from client to client helping to set up their gear, and if you are not part of their group asking you to move somewhere else.  The amount of high-cost photo gear is incredible; I wonder how many hundreds of thousands of dollars in Canons and Nikons congregate there.  During the winter time in the nearby town of Socorro where most photographers stay, the breaking into vehicles to steal photo equipment is paramount and in some hotels you find signs warning you about it. 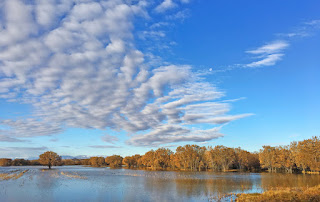 There are two ponds along Rt. 1 south of San Antonio where the crowds (above) congregate for the morning show.  The parking lots are full not just of cars but large SUVS; some people come and stay weeks at a time.  Yes, even the pets come; below the couple hear the train’s horn and were watching to see where it was coming from. There are more than birds in Bosque such as mule deer, javelins and the occasional bobcat that I missed.  By the way, the pair was not run over by the train.  A trivia moment: San Antonio was the birthplace of Conrad Hilton where he learned the trade at the Harvey House run by his father. 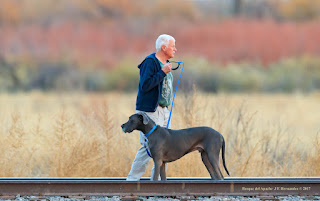 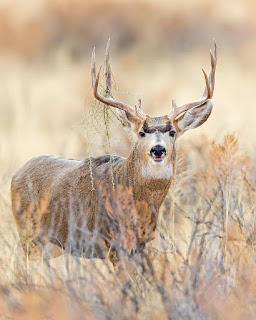 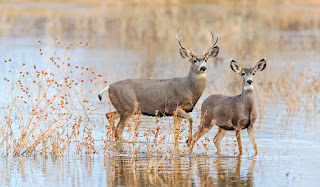 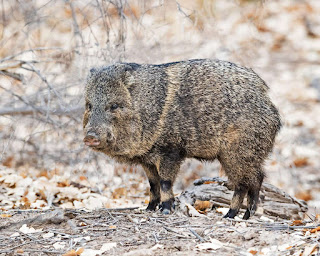 After the excitement of the early morning bird experience, there was not much to do so I roamed around the countryside.  I have driven some of the roads before and marveled as to things that I missed before such as some of the Salinas Pueblo missions. Gran Quivira is an example; I passed it by unintentionally back in 2009 and is the oldest and largest of the Salinas Pueblo Missions.  What are left are the ruins of the Pueblo Mission and most unusual from the others in the area is that it is located in the top of a hill.  Vazquez de Coronado the Spanish explorer visited this area in the 1540’s when looking for the legendary gold city of Cibola.  Quivira is the best known and the largest of the Salinas pueblos and from the days of Coronado it was attributed with being the famous city they were searching for.  But all he found was not the mythical city he was searching but poor Indians of "very good build with their privies slightly covered.” The mission church whose ruins survive was erected in 1629 by Father Francisco Acevedo. It ended by 1675 due to the attacks of the Apaches Indians who invaded from the plains. As you can see it was built with flat stones. Next are the ruins of the church and of course it appears that some restorations have been done just as in the other nearby ruins. What is unique to this site is the long fenestration along one of the walls of the church and the wells.  First image below is a panoramic taken with an iPhone and the others with a full frame 11-24 mm lens.

Below is a kiva, underground structures associated with Pueblans kachina beliefs used spiritual ceremonies.  These were common in the Southwest and their functions much debated and still used.  They appeared to have multiple functions and were used as grain storages in occasions. 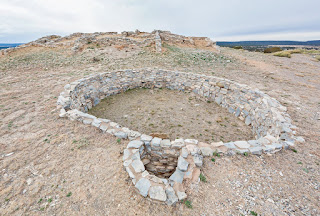 Quarai as the others, are misnamed missions are associated with the Spanish conquerors when in reality there were ancient Indians enclaves.  Franciscan priests introduced the Catholic religion to the missions mentioned and in fact, the Indians suffered from the famous Inquisition.  The Spaniards arrived in 1598 but the church of the Purisima Concepcion was not completed until 1632 and oddly included a square kiva inside the convent and may have been used as a conversion center from the Indian beliefs to Catholicism. 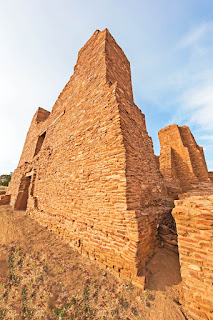 San Gregorio de Abo and Quarai are both located in flat land and made with red stones while Quivira is on a hill and of whiter stones. Abo was an active Indian community when the Spanish arrived around the 1580’s and the church built in the 1620’s but the complex was abandoned just as the other missions in the area by the 1670’s.  Abo was the headquarters for the missions in the Salinas area. The Salinas Pueblo Missions discussed above were named after the salt lakes in the area used by the Indians as a salt supply and later by the Spanish colonizers. 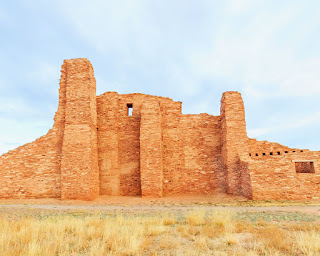 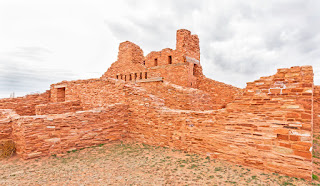 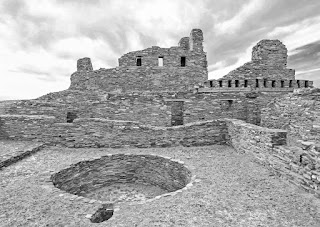 Another visited site that I had driven by and ignored in the past is San Lorenzo canyon.  It consists of a central canyon ending in a spring with smaller ones branching from the sides; some ending in water springs too.  The formations were formed by mudstone conglomerates.  The formation below is to the right of the entrance to the canyon and the convoluted mudstone formations are called “slickensides.” One can drive most of the length of the canyon but need to walk to the spring that is the next to last image below.  Since it was early winter most of the trees still had their foliage on with prevailing yellow color. 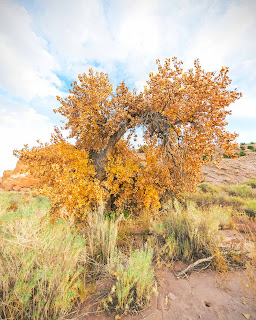 As previously mentioned the landscape opportunities are numerous and I will end with San Miguel Mission in Socorro founded in 1598 but not part of the Salinas Pueblo Missions.  In fact

Juan de Oñate arrived here in 1598, an Indian village named Teypana whose inhabitants provided the conquistadores with food and water; the reason for the name Socorro. Will I return to Bosque?  No but I said that before. 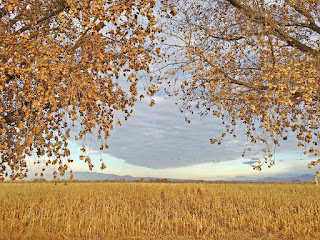 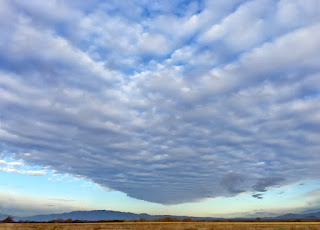 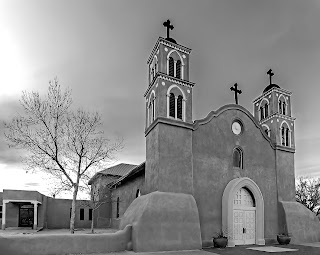 LOL!! I am sure your arm is black and blue from being twisted to force you on a trip you did not want to go.

I love the first picture in the series of the cranes.

What a cheek the guides have asking you to move. I sure hope you did not. If they snooze they lose. Nothing is safe anywhere anymore least of all expensive equipment like cameras.

I have never seen or hear of a square kiva until now. Very interesting. I wonder who actually built it? The monks or the Indians.