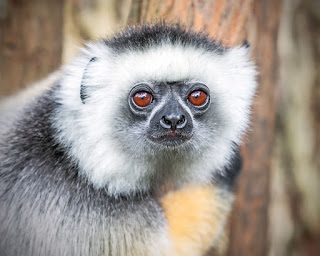 I have seen many animals but none are as interesting as the lemurs found only in Madagascar.  They are listed as pro-simian primates, meaning that they evolved before the simians but are primates…go and figure. What is peculiar about them is their variety, more than 100 species; some are only nocturnal, live in families or by themselves, some are large and others the size of rats. They are threatened in their habitat due to deforestation and hunting both due to their main predator…man.  Their name in Greek and Roman antiquity was associated with death, wondering spirits and evil, probably because of their nocturnal habits, their ghostly cries penetrating gaze and Dracula-like upper canines. 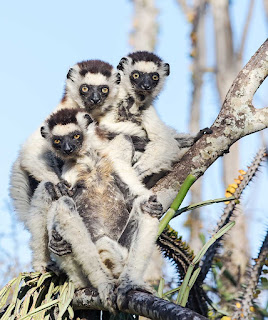 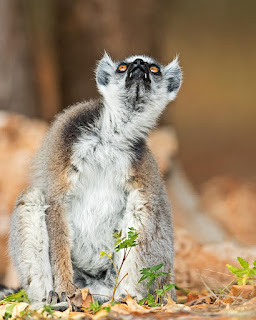 Lemurs in the forest are difficult to photograph and almost impossible at night.   The use of a tripod is complicated due to the thick undergrowth and how fast they move.  By the time one is able to set up a tripod, they will be gone.  So I carried two cameras, one with a 400 and the other with a 70-200.  And to make things complicated one has to cross streams, climb hills, fight the leeches and deal with the rain.  It was work; one day spent 7 hours working in the forest.  Below is an Easter Gray Bamboo lemur that specializes in just eating the leaves of the bamboo tree. 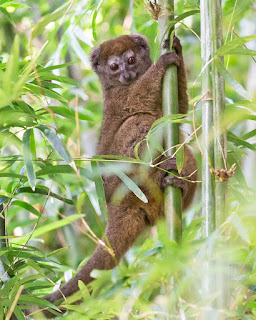 On one occasion while walking in the forest, I took a break and sat down.  Then Red-fronted Brown lemurs appeared foraging on the ground and approached me.  It was a family of about twelve; they came by me, sat, watched me with their penetrating stare for a while, and kept going.  One of the lemurs started to bite the bark of a tree and fluid started to ooze and the animal started to lick.  They say that lemurs do not drink water and obtain it from the food they eat, mostly leaves and small berries. 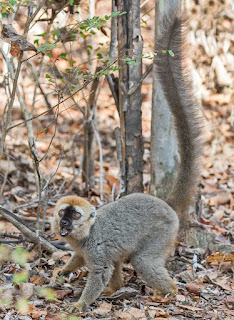 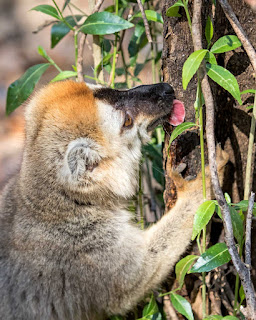 Before I forget, lemurs have a regular and a sub-lingual tongue.  The latter is below the larger one it is said that is used to clean their lower front thin teeth forming a dental comb.  Allegedly, they use the sub-lingual tongue to clean the teeth that they use to preen and clean their fur; any debris and hair accumulated is then flossed with sub-lingual tongue. They have 6 teeth, the 4 frontal ones as in humans and the other two are what would be equivalent to the lower canine teeth in us.  I was able to catch one of the above lemurs with an open mouth showing the dental comb. 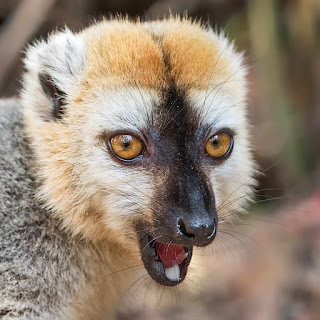 I found the Verraux’s Sifaka lemurs the most interesting because of their behavior of bouncing sideways when moving on the ground.  They hop a few times, stop and then continue moving finally jumping into a tree.  They also jump from tree to tree covering long distances and always land sure-footed, or are it sure- handed, since the four extremities look like hands. They live in families and on one occasion, two families ran together and there was a battle, as they are territorial too. 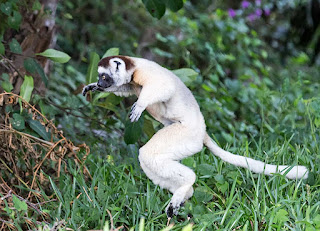 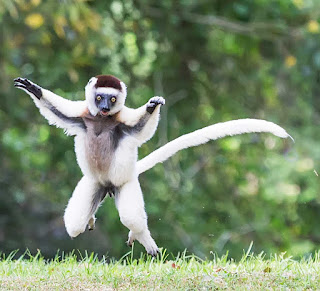 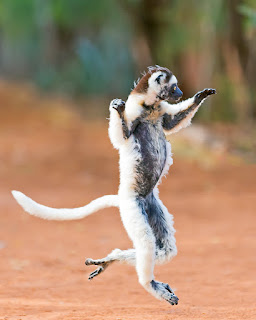 Females mostly take care of the young ones, and it is amazing how they hold to their moms and don’t fall off.  On occasion they climb off onto a nearby branch but the moment the mother moves, they jump aboard.  I had never seen a male monkey in Africa or in the Americas “carrying” a young one…usually the females and I thought the lemurs would behave the same.  Well, I photographed a male Verraux’s Sifaka Lemur taking one for a ride during his jumping sequence. 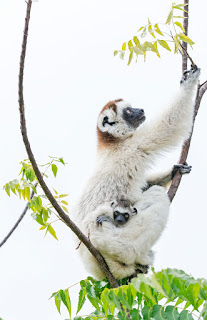 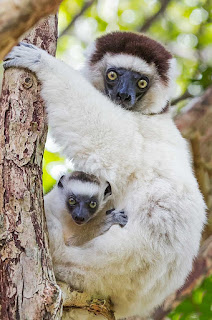 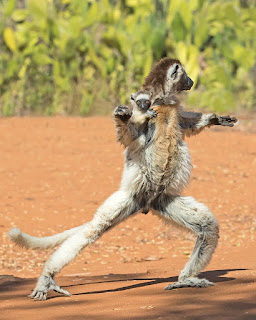 The Ring-tailed lemurs are the other interesting group spending time on the ground but don’t dance but are very inquisitive and roam in families.  They are fond of tamarinds and I observed them on a tree going from fruit to fruit, squeezing with the hands and moving on if not ripe.  When a ripe tamarind was found they made a meal out of it, breaking the skin and eating the pulp. 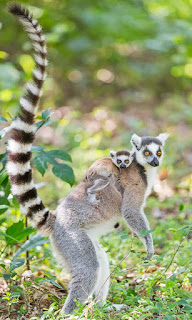 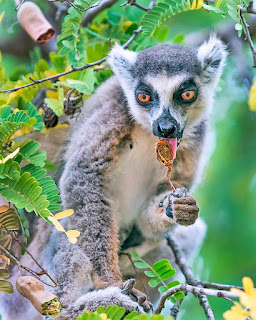 One behavioral characteristic of these lemurs (as well as others) is that they follow feeding and sleeping cycles during the day. They are susceptible to the cooling at night and associate in groups to share body heat when going to sleep.  One goes to a branch and holds to the trunk for stability and next other line up behind embracing the other from behind.  They usually become active in the morning generally around 9 AM when they feed until generally about 11AM when they go to rest.  Then activity starts again around 3 PM till around 5 PM when they start looking for a sleeping tree to spend the night; it appears that they go into torpor.  They also face the sun and assume what appears like a “Buddhist lotus” praying position and just seat enjoying the landscape. 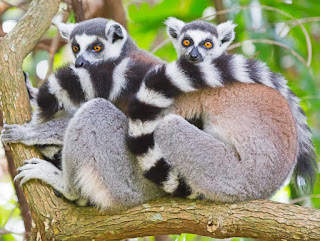 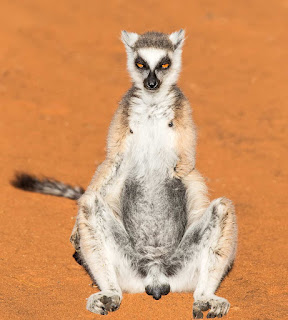 The Diademed Sifaka Lemur has the most attractive coloration pattern and is also extremely friendly. By the way, they are just referred as sifakas due to the hiss sounds that they make. 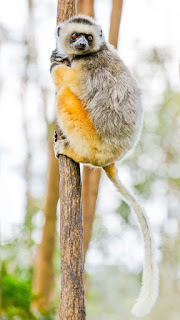 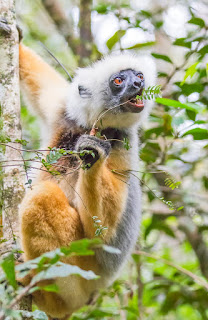 This blog is getting too long so I am just going to upload images of other species of lemurs.  The last image is that of a foosa, also endemic to Madagascar and the top predator of lemurs.  It is rare and was to photograph one. 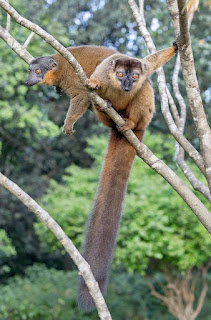 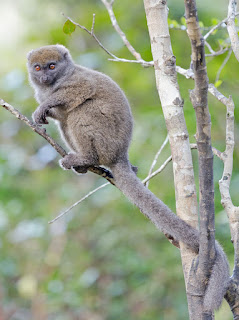 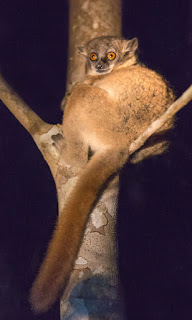 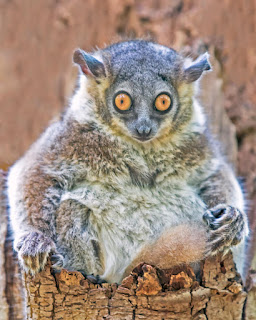 Fossa, the predator of the lemurs. 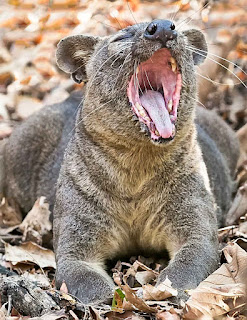 What totally fascinating creatures Jose. I did not know that some of the species were so small and that there were so many different kinds. The pictures and information is excellent and I enjoyed learning more about them. Just love the way they use their tails. Thanks for sharing this wonderful post.