Great Falls to Glacier Park and Back.

This is the first time that I get to visit Montana by starting in Great Falls and driving NW via Rt.89 towards Glacier National Park thru mostly an agricultural area that has been better economic times, most of the towns showed significant signs of neglect.  At Fairchild, I ran into an enormous conglomerate of silver silos.  They are owned by Anheuser-Busch brewery…imagine the millions of gallons of beer that will be brewed from the grain stored in this silos.

Continuing in Rt. 89 I ran into Bynum, kind of a mecca for dinosaurs lovers.  There is a museum and a store that sells rocks and fossilized bones.  And of course lots of dilapidated buildings that were probably there when Tyrannosaurus rex roamed the streets chasing humans. 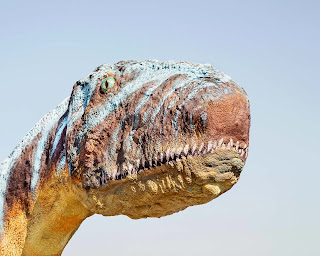 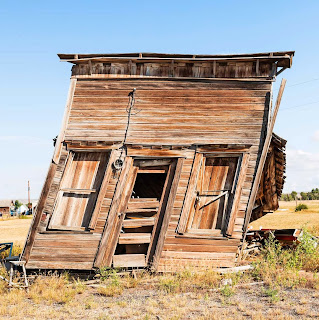 The landscape past the above town turns wheat fields as far as the eye can see and soon found myself in Indian lands. If you don’t behave the braves will chase your car in horseback and get it full of arrows as if were a buffalo. 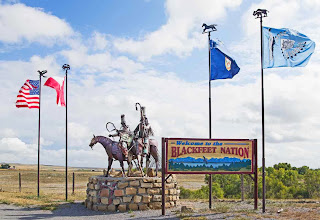 At the town of Browning, I turned into Route 2 going west and soon found myself in a mountain road bordered by a thick forest, this roads parallel the railroad tracks built back in the 1930’s in the  Marias Pass to cross Rocky Mountains in Essex. Nearby is the Izaak Walton Hotel, built in 1939 as a concession from the Great Northern Railway. It was originally used to house the crews who cleaned the snow off the railroad tracks at the Marias Pass.  Now it is working hotel and railroad museum. It was built by 12 carpenters in 3 months; what an accomplishment. Behind the hotel is a large railroad yard still in use. The red caboose is now a guest room; notice the wheel detail and the two belts used to rotate the dynamo in the upper right.  It generated electricity for the car when moving. Further down the road, there is a park celebrating the Lewis and Clark Expedition and President Roosevelt.  The statue is that of John F Stevens, the engineer who mapped the pass in 1899 and twho designed and constructed the railroad tracks to cross the Continental Divide. 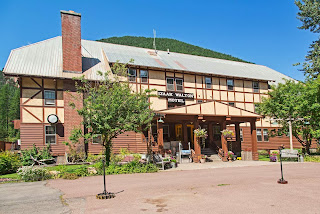 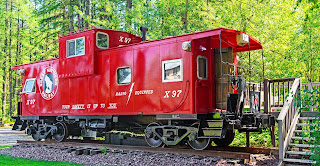 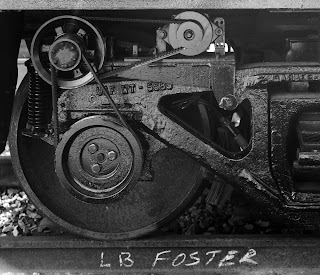 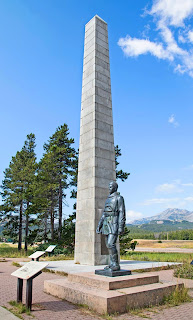 Finally arrived at Glacier National Park.  As all parks out west in the summer time, it was crowded with traffic jams made worst by the highways repairs that were taken place at the time. Drove up to Logan Pass, located at an elevation of 6653 feet where a large Tourist Center is located.  From here you can walk through the meadows where the ground squirrels and marmots are habituated to the tourists and are easy to photograph. 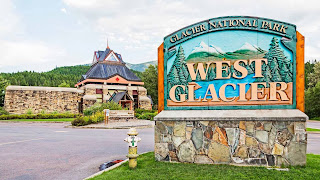 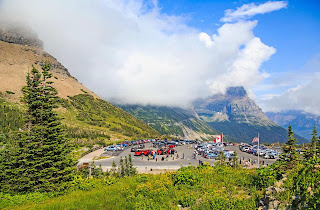 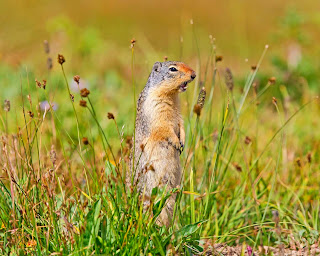 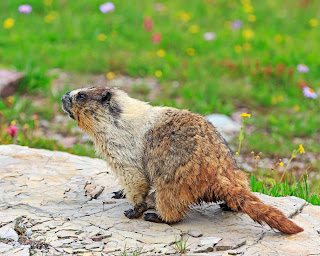 The place was overwhelmed by nature lovers and wanabee wildlife photographers that would abandon the trails to get a closer view or shot of some flowers by trampling other… and the ever vigilant Park Ranger, Mr. Douglas Follett chasing the trespassers back into the trail.  He is approximately 87 years old and started working for the Glacier National Park Service in 1942… that is a long time.  He is sharp like a tack and can tell you the name of all the flowers, animal and birds in the park; he also claims to have climbed all the mountains in the park back in his younger years.  Quiet a personality and a National Treasure. 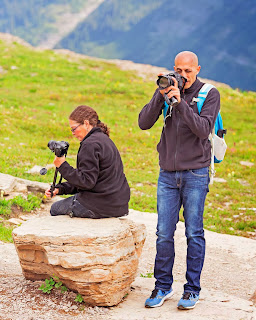 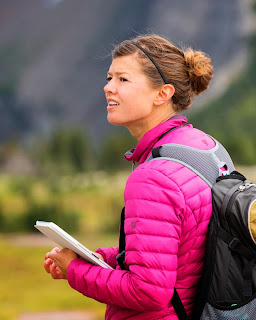 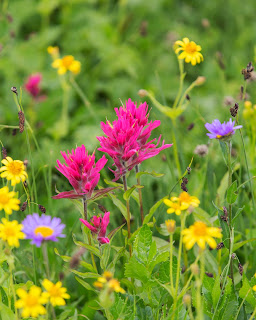 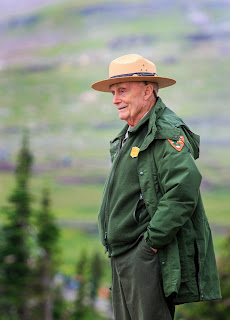 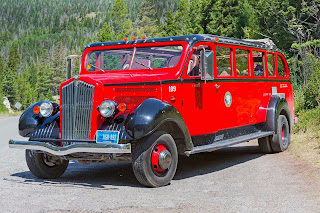 I traveled the main road within the park between the West Glacier Gate and the St. Mary Visitor Center twice and the most exciting thing to be seen where the glacier carved valleys and a multitude of waterfalls.  Unfortunately the glaciers are mostly gone or basically non-existing, and I really did not see any major wildlife other than some mountain goats at a distance; there are bears and moose these were not seen.  Overall, the visit to this park was disappointing and a better bet will be to just to drive to Yellowstone that I find more rewarding. 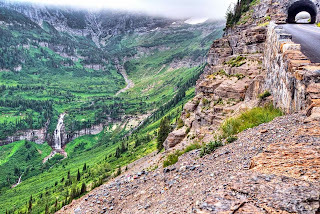 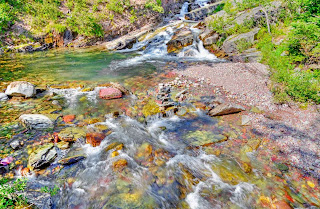 Continuing West in Rt. 2, I passed a corral with the most peculiar horses; they appeared to be low maintenance ones since they need not attention; just like plastic flowers.  I spent the night at Kalispell, another small Montana town but this one was busy and alive.  It has a beautiful Courthouse and the Conrad Mansion, built by the richest man of the town back in the late 1800’s.  Mr. Charles E. Conrad founded the city and was an Indian trader and fighter and made his money as a Missouri River freighter. The old high school was a very impressive structure. 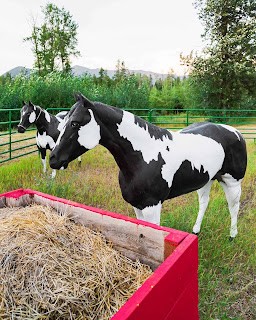 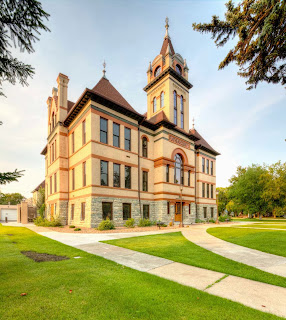 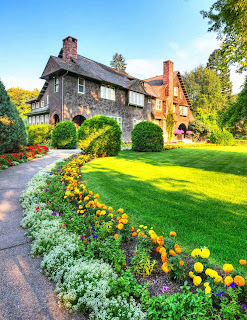 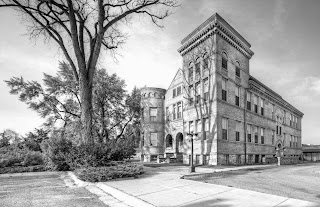 Continuing south in Rt. 93, I ran into a Duck and a family of bears in the town of Polson, located in the shores of Flathead Lake. Farther down the road, I took a right into Rt. 212 and drove into Charlo, where I only saw a dog walking the street…where have all the people gone?  A closed seed store and an abandoned silo by the railroad tracks are reminder of a more prosperous past. 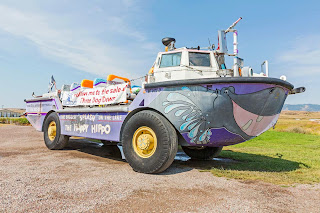 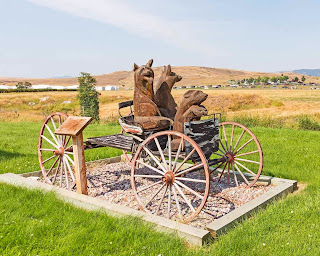 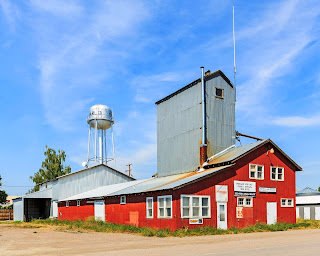 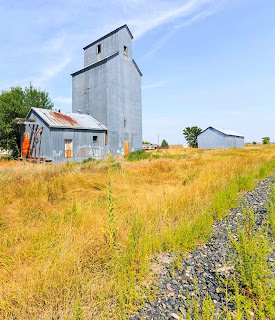 Past Charlo, is the National Bison Range, there was no a bison to be seen that day.  I did into the Range and at one of the scenery stops; you could see a valley that at one time was the bottom of a pre-historical Lake Missoula (the name is derived from and Indian word meaning “place of frozen water).  It existed about 15,000 years and flooded an area of approximately 200 miles in western Montana to a depth of 2000 feet in some areas.  The city of Missoula about 60 miles south of the pre-historic lake; is the home of the University of Montana and has more micro-breweries/capita than any other city in the USA.  Moose Drool is probably the best known beer brewed here. The wall with the sculpture is in one of the buildings in the University and the last image, is that of the city’s courthouse.  Although I started in Great Falls and ended there; I never took a photo of the place…too busy arriving and departing from the airport; maybe next time. 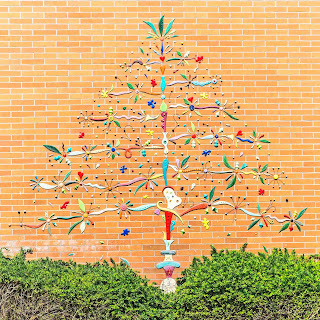 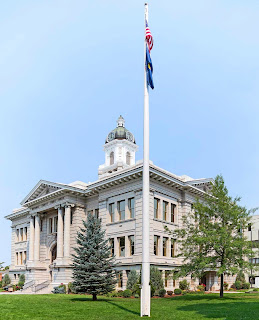 You drank moose drool?? Good grief!! LOL!! Did you stop by that first brewery and go beer tasting? There sure is enough beer in them to keep half the country happy.

That park ranger probably has many interesting stories to tell and the kind of person I would like to have chatted to in order to hear some of them.

Horses? Bears? I hope none of them bit you? LOL!!

A lovely post Jose and as interesting as always. Thanks for sharing.

Nice trip, huh? No surprises that there a lot of animals and people, at the parks during the summer. This part of the country is usually underdeveloped, as seen by abandoned seed store and silo that you've encountered. The silo could've been converted into a cell site so that it could be useful again, but for a different purpose.
Jen Lau @ TowerPoint.com