The Jaguars of Pantanal, Brazil 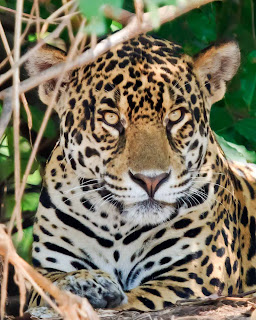 Just returned from one of my "one in a lifetime" adventures; I was dreaming at least to photograph just one jaguar.  It was surpassed, in 8 days sighted 23 of these cats.  My first encounter was with a jaguar resting on bluff next to the hidden by the underbrush (above). 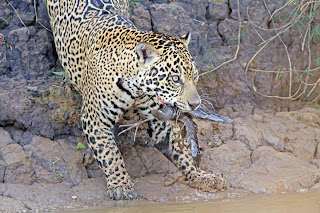 The next day, I saw a jaguar shaking a small tree and could not figure why? Then, I realized that it was knocking young flightless birds from their nests.  These were baby limpkins, and as they dropped from the tree, fell into the water and were able to swim ashore.  The leopard walked down to the river's edge, picked one chick, eat it and so on. 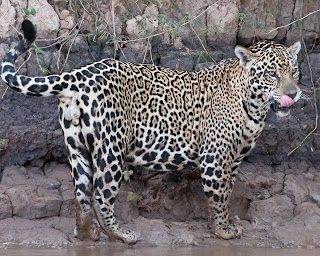 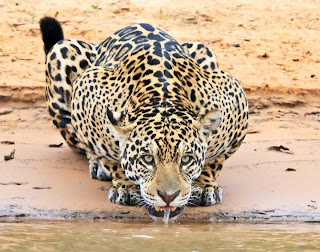 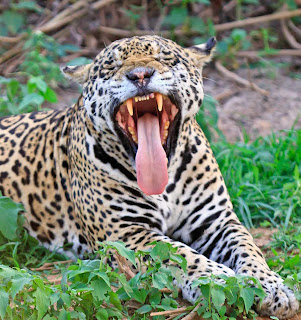 After feasting the jaguar walked up the bluff and along the shore to a sandy beach to get a drink, it paused, looked around and continued drinking.  Then went to take a siesta. 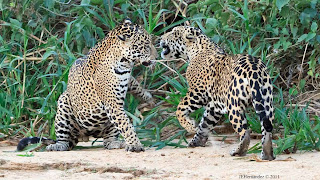 On another occasion, I witnessed a fight between two males; they appeared to be siblings just playing.  But the next day in the same area, there were 4 males and one female.  It became clear to me that the fight that I saw the previous day was not a game; they were fighting for the privilege to visit with the girl.  By this time, the scores were settled and prevailing male was mating with the "she jaguar". 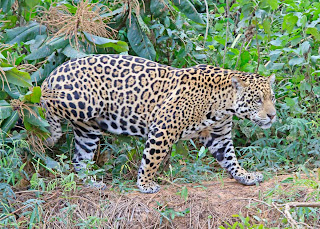 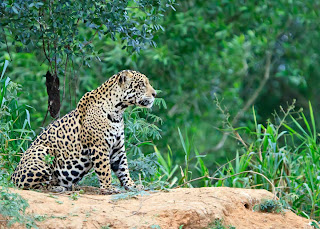 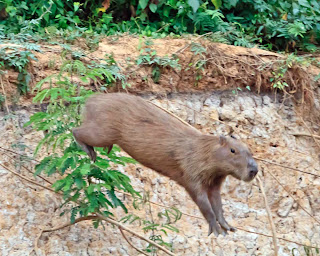 One day I followed a jaguar along the shores of the river from a boat while he hunted for capybaras.  These giant rodents are very alert and can swim and dive swiftly.  He saw a family of capybaras with a young one.  As he paused, somehow the male capybara became aware of his presence, gave a sharp call to which the mom and baby responded by jumping from about 20 feet in height into the river.  The male followed soon after.
Posted by Jose's World at 11:11 PM

Ah here are your jaguars. alsays wanted one:) Beautiful print on their skin/fur. Your photos are magnificent. Dont' know if I would be able to watch the cat and mous/bird game.

This sure is a once in a lifetime adventure and experience Jose. What magnificent creatures they are and your pictures are as always, outstanding.

The interaction you witnessed between them which you captured must have been wonderful to watch as well.

As always with your posts I learnt something about their behaviour which I did not know and that is how social they are. I always thought they were loners like the leopard.

Do the jaguar easily take to swimming? Once again I know a leopard will but not a lion as most cats are leery of it.

For me the fourth picture of him drinking is the best of all though they are all keepers. :)

Limpkins? I do not know them do you have a picture of them for us?

What unusual rodents the capybara is!! I did not know they could hold their breath as lond underwater as a hippo can - about 4-5 minutes.

Thanks once again for a wonderful and informative post.

What a wonderful opportunity for you, Jose!! They sure are beautiful animals. You captured their grace and confidence/superiority! I especially like the one of the jaguar taking a drink.
Karen/VA

Great shots! Having had the luck myself to see the beautiful jaguar few years back in the Pantanal, I know how exciting it is. The photo I took was one of the reasons, which made me decide to start my own photoblog. Maybe you like it and the photos I am going to post in the next weeks and months.