More Days with the Swans

Two days ago the Swan family left the nest and these are their last images early in the morning. Mom is just counting the cygnets once more...there are ten for sure. 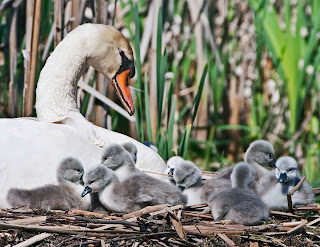 One left the nest earlier and is trying to get back into the nest. Later on that morning, all the cygnets were walking to the water's edge and feeding on the grass that the Dad had pulled from the bottom of the lake and from the fresh sprouting cattails. They would at times venture into the water and started to swim but at times lost their balance and went upside down. They all returned the first night to the nest for the night but no more after that. 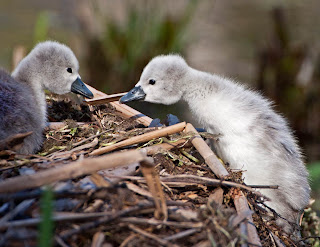 By yesterday, they were the masters of the lake with the Dad chasing the Canadian Geese out of the pond, the cormorants from getting too close and the turtles from snatching one of the cygnets. He was very very vigilant with the turtle and would beat his wings against the surface of the water scaring them away with the noise. Once in the shallow water he saw a turtle and started stamping it with his feet against the bottom of the lake. Both parents would pull grasses from the bottom of the lake and when these floated to the surface, were eaten by the cygnets. I spent 10 hours with them and in my distraction while walking across a stump to cross a muddy creek, slipped and sank to my knees in the smelly muck. One of the cameras got also baptized by the mud but I was able to reclaim it from the ooze and is still working. If you take a close look you may be able to see the egg tooth in th cygnet below, it really looks like nail and is light blue, it will eventually fall off. 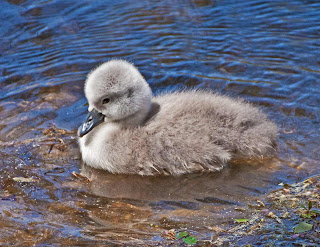 At times the cygnets went to sleep while floating in the water, I observed them just once this date walking on the shore line. I will be taking leave of these wonderful birds for a few weeks
when I will be looking for more photos in another part of the world. I wonder how big they will be by then.

What a wonderful day you must have had Jose!! I think I would have spent most of the time laughing at their antics, they are so cute. I am glad to hear dad is so protective.

It was not your new camera was it? I am glad it is still working.

This is another fantastic post Jose. Thanks for sharing your brilliant pics and day with us.

I really enjoyed the swan update, Jose. I can imagine being captivated by something like this and spending all day watching, as you did. I think I'll always have a soft spot for baby animals.

Glad your camera survived the little mishap in the swamp. I'll bet you had fun cleaning up your boots.

Great series my friend. You captured some awesome images from your trip. Blue Skies and hope you have a productive trip.

Great Photo's of the cute little Swans. An excellent Post.

Nice to meet you.